For years, Michael Cohen worked as President Trump’s attorney and “fixer.” Up until a few years ago, Cohen spoke very highly of Trump, even stating that he’d gladly take a bullet for the president.
However, when the former Trump fixer ran into legal trouble, his attitudes and dispositions quickly changed. Following charges for tax fraud, campaign finance violations, and more, Cohen essentially turned on Trump. He accused his former boss of a litany of wrongdoings and unethical behavior, even testifying against the president in court. 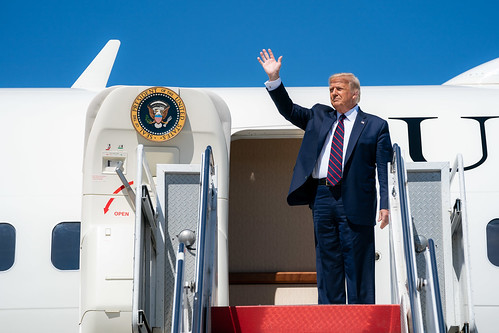 “President Trump in PA” (Public Domain) by The White House

Despite his best efforts, Cohen still went to prison. Now, the former Trump attorney is coming out with an anti-Trump tell-all book; however, the White House is doing its due diligence and exposing the lies being shared by the former Trump fixer, according to Fox News.

The White House vs. Michael Cohen

In Cohen’s tell-all, he accuses the president of racism, shady business practices, and even claims that the president manipulated others into committing crimes on his behalf.
The former Trump lawyer also paints the 45th president as a power-hungry monster; some of the tell-all book’s most salacious excerpts are being widely spread and talked about amongst individuals who dislike Trump.

Perfectly said this afternoon by @brianstelter @MSNBC @biannagolodryga when “MY” credibility and veracity were called into question by #WhiteHouse @POTUS @realDonaldTrump. A must watch! #DeathPunch #Disloyal https://t.co/ObWbh6LYZN

However, the White House is not letting Cohen spew lies without consequences. Within a statement to the media, Kayleigh McEnany, the White House press secretary, cleared the air. McEnany described Cohen as a “disgraced felon and disbarred lawyer” with no plausibility and a desperate to “profit off of lies.”

Cohen is continuing to spread various lies about the president at every opportunity; in a situation like this, it’s also important to remember that the left-wing, anti-Trump media is also working overtime to give Cohen a platform.
The now-disgraced former Trump attorney maintains that he is telling the hidden truth about the president. When addressing his previous defenses and glowing remarks about the president, Cohen claims to have been so enamored by Trump’s orbit that it clouded his judgment.

Yes…it’s being worked on as we speak. Hoping for Tuesday

Many Americans simply aren’t buying it, however. The president himself has also denied the claims made by Cohen; Trump is likewise censuring the mainstream media for intentionally putting out biased news and disinformation for political purposes.
What do you think about the White House’s response to Michael Cohen? What do you make of the claims shared in his tell-all book? Let us know down below in the comments section.