President Trump’s commitment to preserving law and order continues to serve him well. This commitment is furthermore highlighted by Joe Biden’s absolute disregard for law and order, along with Biden’s admitted support for defunding law enforcement altogether.
Earlier this month, the Police Officers Association of Michigan backed Trump’s re-election. The law enforcement group noted the clear choice between Trump and Biden while also praising the president’s policies and steps to ensure that officers can do their jobs. 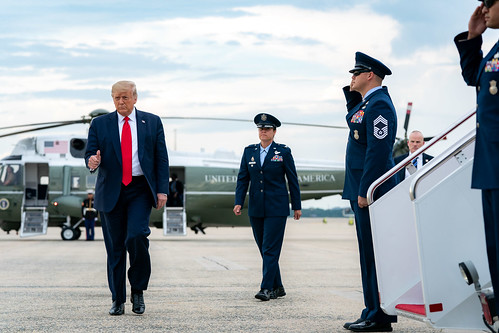 Yesterday, Trump won another endorsement form a law enforcement organization. This time, the support for his 2020 re-election arrived from the Arizona Police Association, according to information from Breitbart News.

In a statement, the Arizona Police Association (APA) made the reasons behind their endorsement of Trump quite clear. The law enforcement organization ultimately stated that the Trump administration’s work on behalf of law enforcement is beyond any other administration  “in the history of our republic.”
Further, the APA ripped Joe Biden for his allegiance to the “far-left wing.” This came before the police group noted the former vice president’s interest in scrapping qualified immunity and defunding law enforcement altogether.

America's police officers know who will always have their back and are ready to help deliver victory to Team Trump/Pence in November.https://t.co/zfrqhn5pmm

The Arizona Police Association then contrasted this with the president’s opposition against defunding police, reenactment of military surplus tools, and strong legal action against individuals who bring onslaughts against members of the law enforcement community.
Later today, President Trump is also set to convene in the White House with the National Association of Police Organizations Leadership.

Will Trump Win More Endorsements from the Law Enforcement Community?

The president’s rhetoric and policies towards police have earned him great respect within the law enforcement community. With that in mind, further endorsements from additional police groups would not come as a shock to many Americans.
The stark contrast between Trump and Biden’s positions on law enforcement is something that Americans will take note of. Of course, the media has yet to be as vocal about police groups endorsing Trump as they are about polls showing Biden in the lead.

President @realDonaldTrump on Joe Biden saying he would Defund the Police pic.twitter.com/iyVl1RbLqT

Over time, many Americans who support the president earned a reputation as the “silent majority.”
As such, numerous conservatives believe that Trump will ultimately win a second term in office, despite COVID-19 fallouts and attacks from Biden.
What do you think about the Arizona Police Association’s endorsement of President Trump? Do you believe the president will have more law enforcement groups back his re-election? Let us know what you think down below in the comments section.