As the 2020 presidential election plays out, the stakes are getting higher and higher. Since Joe Biden has announced California Sen. Kamala Harris as his running mate, the pair have amped up their attacks against President Trump.
The president’s re-election team hasn’t hesitated to strike back, though. In several ads, the Trump 2020 team has gone after the hardcore leftist policies that both Biden and Harris have embraced. 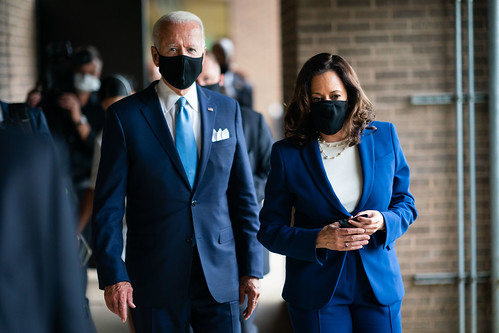 “Announcement of Senator Kamala Harris as” (CC BY-NC-SA 2.0) by Biden For President

In addition to ads, the president himself is also set to appear in battleground states next week. According to Fox News, Trump will spend time in Arizona, Wisconsin, and Minnesota for various campaign events.

On Monday the 17th, Trump is scheduled to arrrive in Wisconsin and Minnesota to continue furthering his presidential campaign. Certain political pundits have speculated that these visits are happening to detract attention from the Democratic National Convention coming up next week.

In addition to visiting Wisconsin and Minnesota, the president is also set to visit Arizona on Tuesday. Democrats also criticizing this forthcoming visit, stating that it’s a “desperate publicity stunt” designed to stifle the voices of Americans.
Officials linked to the president’s re-election campaign recently reported that he plans to visit Pennsylvania on Thursday next week. If Trump does visit Pennsylvania, his arrival will reportedly take place mere hours ahead of Biden accepting the Democrat Party’s nomination.

More on the Trump Campaign

The Trump campaign remains very much active as this year’s election continues to play out and intensify.
The Trump 2020 team has repeatedly hit Biden-Harris for their support of open borders, a Green New Deal, wanting to confiscate guns, etc. Trump’s re-election campaign also continues to warn Americans of the negative impacts that far-left policies will have on people’s livelihoods, prosperity, and opportunities.

President @realDonaldTrump: Police officers are loved and respected by our country, despite the Fake News about them pic.twitter.com/QlNv0gaKzG

Another point of contention between Biden-Harris vs. Trump-Pence deals with attitudes towards law enforcement. The Democrats are taking immense hits for their support of defunding police. Meanwhile, Trump and Pence continue to enjoy endorsements from multiple police organizations and law enforcement groups.
The president’s re-election team is also painting Trump-Pence vs. Biden-Harris as freedom and prosperity vs. socialism and decline.
Do you think President Trump’s upcoming campaign stops will lead to him winning battleground states in the general election? How do you think Joe Biden’s campaign will attempt to counter the president’s upcoming appearances? Let us know in the comments section below!