As a major U.S. media outlet, CNN is known for its anti-Trump and left-wing bias. On countless occasions, the outlet chooses to negatively opine about President Trump, rather than simply reporting on the details and allowing Americans to reach their own conclusions.
CNN and the 45th president have sparred with one another countless times. Trump routinely holds CNN’s feet to the fire for misleading and often flagrantly untrue stories and implications. 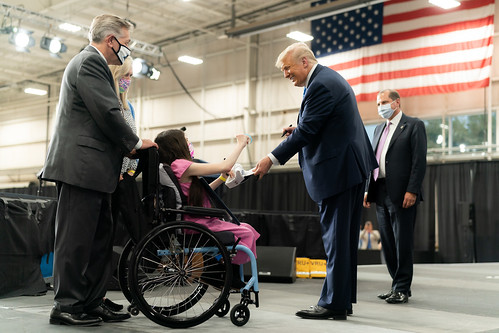 On Friday, the network sat down with three supporters of President Trump and three Biden fans for a Pulse of the People segment. Breitbart News reports that CNN appeared taken aback by Trump supporters’ reasons for wholeheartedly backing the 45th president.

A Close Review of 2020’s Pulse of the People

During prior segments, CNN hosts have actually made fun of Trump supporters, even going as far as to question their intelligence.
On Friday, though, the liberal news channel appeared interested in understanding why certain Americans back the president. Sean Roberts, a Florida-based Trump supporter, articulated his support for Trump very clearly; Roberts lauded the president’s work to make the nation great for everyone and “[bring] us together.”

President @realDonaldTrump: "You have to have a president that's going to work his ass off for this country," not Joe Biden who takes off everyday pic.twitter.com/DZaXZmaSZX

Alexis Frost Cazimero, a Trump voter based in California, also praised the president when questioned by CNN. Cazimero explained to the network that Trump is fighting for Americans’ rights that are being stripped away.
The California Trump supporter cited mask mandates as an example, stating that she doesn’t feel Americans should be shamed or vilified for not wearing a mask. President Trump himself has also noted that many folks across the nation have issues with masks and don’t feel comfortable wearing them.

The Silent Majority in the 2020 Election

President Trump and his political allies remain fully confident that he will win a second term in office. This goes beyond the polls, but includes the turnout for Trump across the nation. Tens of thousands of Americans routinely show up to hear the president speak at rallies and other events.

President @realDonaldTrump: I will always support the heroes of law enforcement – including over 50,000 incredible Black Police Officers who risk their lives every day to keep us safe!#BlackVoicesforTrump pic.twitter.com/2T5Wwboimh

The SCOTUS battle also reflects the presence of the silent majority; more Americans than some people realize are eager for a conservative justice to fill the seat of the late Ruth Bader Ginsberg. Later today will come President Trump’s official nominee for the U.S. Supreme Court.
What did you think about Trump supporters’ listed reasons for backing the president during CNN’s Pulse of the People? Do you think the silent majority will show up for Trump on Election Day? Be sure to let us know your opinions and predictions in the comments section below!