Trump Rallies with Supporters in Pennsylvania

As various restrictions are lifted across the nation, President Trump is gradually increasing his travel to different parts of America. During times when most lockdowns remained in order, the president and his re-election campaign chose to campaign virtually.
While the president gets out and about, he’s speaking with supporters and drawing a very clear contrast between himself and Joe Biden. This means discussing the differences between a second Trump term vs. a first Biden term. 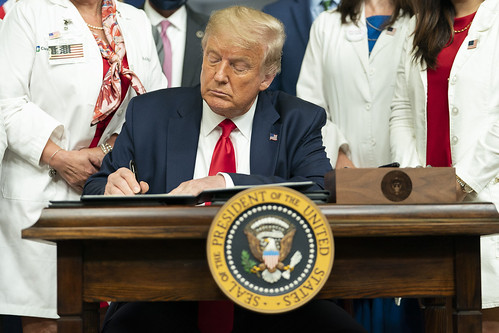 Earlier this week, the president spent time with supporters in Old Forge, Pennsylvania. Trump specifically talked about the ways that a Biden presidency would hurt Americans and the nation as a whole, reports Washington Examiner.

A Closer Look at Trump’s Campaign Stop in Pennsylvania

During remarks at Mariotti Building Products, the president explained exactly what Biden has in store for American citizens. This includes a “permanent lockdown,” a nationwide face mask mandate, and a “socialist takeover” of the nation’s economy as we know it.
Trump also openly exposed Biden’s ties to radicals like Bernie Sanders and Kamala Harris. Many Americans are unaware that Harris’ Senate voting record is even further to the left than Sanders’; yet, this didn’t stop Biden from selecting her as his vice-presidential running mate.

This election is a choice between President @realDonaldTrump’s record and agenda of freedom and opportunity versus a Democrat agenda driven by the radical left and Joe Biden’s vision that will result in socialism and decline for America. pic.twitter.com/dOQgWbBbCM

The president also called upon Pennsylvania Governor Tom Wolf to open the state, along with other governors who remain committed to shutdowns. Trump stated that Democrats have a duty to “do what’s right” for the United States.

President @realDonaldTrump: Joe Biden hasn’t answered a question since mid-July, something is going on with him pic.twitter.com/tkczK4PDiC

Since the coronavirus, the Trump administration has put policies into effect that help both employers and workers. Republicans in the House and Senate also continue to oppose left-wing legislation that would disincentivize returns to work while increasing the likelihood of more business closures.
Republicans at the GOP National Convention will additionally push back against many false claims made during this week’s Democratic National Convention.
What do you think of President Trump’s campaign stop in Pennsylvania? Are you excited about watching the Republican National Convention next week? Be sure to let us know what you think in the comments section below!