In-person campaigning is a critical element of the 2020 presidential election.
Gatherings across the nation are continuing to happen more and more often. Despite scare tactics regarding a virus that is over 99% survivable, most Americans are ready to get back to normal. 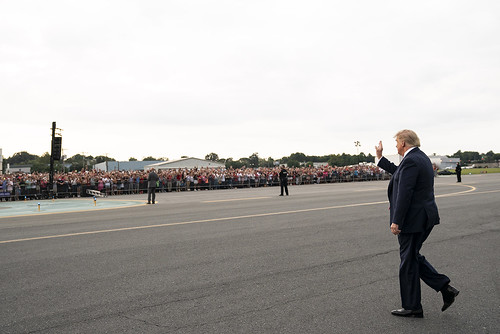 Yesterday, President Trump traveled to North Carolina in order to rally with supporters. This visit arrived after his time in Jupiter, Florida. Similarly to residents of the Sunshine State, North Carolinians met the president with cheers and enthusiasm.
Fox News confirms that during the 45th president’s time in North Carolina, he discussed a series of relevant subject matters happening in the nation and the political world.

A Closer Look at the Latest Trump Rally in North Carolina

While campaigning in North Carolina, the president expressly informed his supporters of what his second term in the White House would entail.
Trump cited some of the top, forthcoming measures as follows: increasing the number of police officers and protections for law enforcement, severing the U.S.’ dependence upon China, shielding healthcare benefits, boosting the American manufacturing industry, and more.

JOE BIDEN HAS NO ENTHUSIASM! pic.twitter.com/FLsRmtRPpX

During the president’s rally in North Carolina, he also informed about what Americans have to look forward to if Biden gets into office.
Trump stated that “a ruinous shutdown” of the country’s labor market will arrive if Biden wins the presidency; additional Biden policies include slashing the cash bail system, removing the nation’s borders, killing suburban communities, and more.

The Future of American Politics

While addressing his supporters in North Carolina, President Trump also discussed the future of our nation’s politics and what he hopes to see.
One of those things just so happens to be a female president. With that in mind, President Trump stated that having Kamala Harris as the first female president would serve as an “insult” to America. Trump slammed Harris, stating that she is not well-liked, yet more intelligent than Joe Biden.

President @realDonaldTrump: The next time you see videos of screaming, Far-Left maniacs shouting wildly at peaceful Americans, remember this: These are Joe Biden supporters. pic.twitter.com/U1E2wOxjcp

Trump’s remarks about the horror of Harris as the first female president arrives as Biden’s mental competency continues coming into question.
Therefore, many Americans believe that if the former vice president won the election, it wouldn’t take long before he stepped down or were declared mentally unfit; this, of course, would cause Kamala Harris to become (the first female) president.
What did you think about President Trump’s rally in North Carolina yesterday? Will you be going to any Trump rallies near you between now and Election Day? Share your thoughts with us down below in the comments section.