Americans have less than three weeks left until Election Day.
Earlier this month, the Trump campaign temporarily shifted gears after the president tested positive for the virus known as COVID-19. However, Trump has since recovered, tested negative multiple times, and no longer poses a threat of spreading the virus. 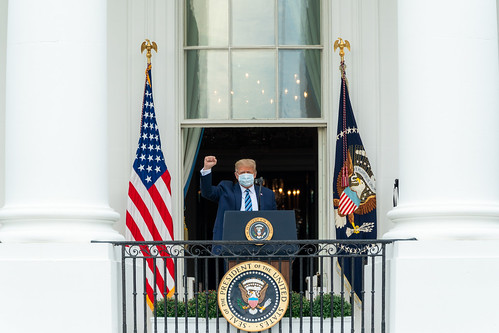 As such, both President Trump and Vice President Mike Pence have fully resumed in-person campaign events for a second term of the Trump administration. According to Fox News, both the president and vice president will be campaigning in different parts of the nation.

The Latest on Campaigning for Four More Years

Today, President Trump will campaign from the White House Rose Garden. During this period, the 45th president is set to speak about the economy; more specifically, Trump shall discuss how his policies will foster job growth, positive workplace developments, and more. In attendance to hear the president speak will be various Economic Clubs.
The vice president, on the other hand, is set to travel to Michigan for a campaign event this afternoon. Pence will stump in Grand Rapids; already, the vice president is scheduled for arrival at a manufacturing facility. This facility will also host a pro-Trump rally for the president’s re-election.

Hunter has a history of trading on his father’s power for personal enrichment. pic.twitter.com/2EWtGeYfsg

Americans should also be aware that the latest campaigning from the president comes after his rally in Pennsylvania yesterday. The Trump rally went off without a hitch and supporters in the crowd hung onto his every word.
Like other conservatives, Trump has repeatedly urged his supporters to get out and vote, especially as early voting opens up in several states across the country.

While the president and vice president are campaigning before the public, Joe Biden and Kamala Harris will not be doing the same.
The former vice president is set to partake in a virtual fundraising event; meanwhile, Harris, as a California senator, is engaging in the confirmation hearing for Judge Amy Coney Barrett.

.@SenJohnKennedy on oath Supreme Court justices take: "Senator Harris just called you a liar. She said that if you take that oath you'll be lying…Let's just cut to the chase. She said you're a liar. Are you liar?"

Judge Amy Coney Barrett: "I am not a liar Senator Kennedy." pic.twitter.com/blhE7nVb6a

Barrett’s confirmation hearing has made headlines since Monday. Democrats have grilled the judge on a series of issues from abortion to Obamacare and more. Senate Democrats also continue to allege that the confirmation hearing is not legitimate and ought to be postponed until a new president is elected into office.
What do you think about the campaigning plans for presidential candidates? Have you already cast your vote? Let us know down below in the comments section.