As the 2020 presidential election gets closer to its inevitable end, there are a series of polls out there.
Contrary to what many Americans may know, not all of these polls show Biden leading; however, the polls that assert a Biden lead are the ones getting the most mainstream attention. 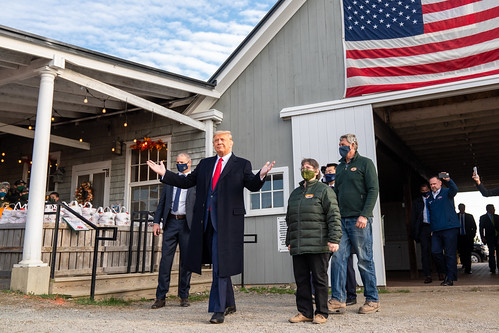 As the press displays Real Clear Politics polls that show Trump trailing Biden in several states, they’re not giving equal attention to Trafalgar Group polls; these findings have the president dominating his election rival in multiple battleground states.
In another positive sign for the president and his re-election campaign, a new poll from Rasmussen shows President Trump leading Biden nationally, confirms Breitbart News.

A Closer Look at Trump’s National Lead Over Biden

According to Rasmussen, the president has 48% support from likely voters in the country, while Biden has only 47% support. The shift in Trump’s favor comes amid Democrats’ already existing concerns that Biden ultimately won’t make it across the finish line.
In recent weeks, the former vice president has taken heat for scandals surrounding his son and his tax plan, something that even non-Republicans are cringing about.

The latest findings from Rasmussen indicate a 2% decline in support for Biden, conversely to Trump’s 2% increase. As the former vice president has dialed back campaigning and put lids on public events early in the morning, Trump travels to multiple states for several rallies, often in one day.
While the election wraps up, the Trump campaign continues to aggressively go after Joe Biden in campaign ads and during appearances on the trails.

Seven days remain until November 3 officially arrives.
In contrast to Democrats’ worries that Biden will lose, Republicans are confident in four more years. This confidence also arrives on the heels of a recent political win for the GOP; last night, the Senate officially voted to confirm Amy Coney Barrett as a Supreme Court Justice of the United States.

As the election inches closer, authorities are also preparing for violence to break out. Numerous left-wing groups have already indicated that they will riot and cause trouble if the president doesn’t concede the 2020 presidential election.
What do you think about President Trump’s new national lead over Joe Biden? Will it result in four more years? Have you voted yet? Let us know what you think the election outcome will be down below in the comments section.