Michigan has captured national headlines over the course of this year. Recently, the Michigan Supreme Court ruled that Democrat Governor Gretchen Whitmer can no longer (mis)use a 1945 emergency powers law to unilaterally pass sweeping COVID-19 orders without the state legislature’s approval. 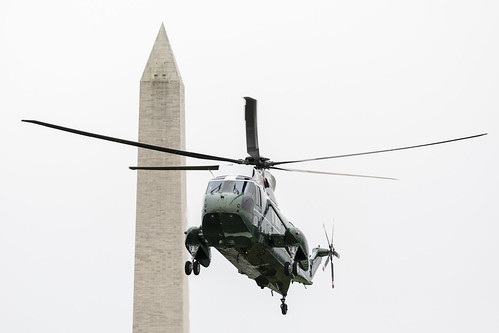 “President Donald J. Trump Arrives on the” (Public Domain) by The White House

Now, Michigan is largely considered a battleground state. It’s an area that President Trump and Vice President Mike Pence have visited on multiple occasions, generating heavy turnout from state residents. Biden has also visited Michigan, albeit garnering considerably smaller and drier crowds.
Now, a new poll shows that President Trump is leading his election rival in the Mitten State, according to Breitbart News.

What to Know About Trump’s Lead in Michigan

Yesterday morning, a new Trafalgar Group poll showed that President Trump currently leads Joe Biden in Michigan by almost 1%. Contrary to what the media might claim, the president’s dominance over Biden in Michigan is a pattern; last month, the Trafalgar Group also found Trump ahead of Biden by nearly 1%.
Trump’s lead over Biden arrives as Michigan residents appear to tire of leftist leadership. The aforementioned Supreme Court ruling against Governor Whitmer only happened after more than 500,000 Michiganders signed a petition to repeal the emergency powers law.

Some folks suggested that Whitmer’s tyrannical rules, sweeping orders, and draconian mandates would ultimately backfire. Republicans seized the opportunity to provide a new option of leadership to Michiganders and that appears to be paying off.
During the times that Trump and Pence have spoken in Michigan, they’ve each drawn much more energetic and passionate audiences than Biden.

Additional polls have shown President Trump ahead of Biden in Florida, Arizona, and other states.
Despite the shift in polling that’s happening, Americans are stating that what ultimately matters is the vote. Unfortunately, though, as Democrats push vote-by-mail, more and more issues are arising. Some people aren’t getting their ballots; other ballots are ending up in trash bins or without signature lines for voters.

Voting in person is something that many Americans have opted to do for their own peace of mind. Despite what Democrats may claim, there are, and continue to be, issues with mail-in voting.
Therefore, as early voting kicks off in more and more states, some folks are opting to go to the polls and vote in person.
What do you think about President Trump’s lead in Michigan? Do you believe the state will vote red this November? Let us know down below in the comments section.