Within the past several weeks, battleground states in the 2020 presidential election have become thrust to the forefront of national conversations. Likewise, both Trump and Biden set their sights on winning these states that are presumed to significantly impact this year’s election.
The president, along with members of his family, administration, and campaign team are moving swiftly and effectively. Earlier this month Ivanka Trump and Eric Trump spent time in Texas and Georgia to campaign on behalf of their father. Less than one week ago, Vice President Mike Pence also spent time in Arizona to campaign for Trump’s re-election.

EXCLUSIVE: @VP Mike Pence is set to play a key role in the Supreme Court nomination process and will interview each of the 5 candidates Pres. Trump is considering to fill Justice Ginsburg’s seat.
@Mike_Pence spoke with @NorahODonnell about the finalists’ views on major issues. pic.twitter.com/iHkxEVlEWV

It appears as though the hard work of the Trump family and campaign is paying off. According to Fox News, President Trump is leading Biden in Arizona, Florida, and Georgia, all of which are paramount battleground states in the 2020 presidential election.

A Closer Assessment of Trump’s Lead in Battleground States

Some of the latest polls to come out are affirming that the silent majority still very much stands behind President Trump.
At this time, the president beats out Biden in the Sunshine State by four points, coming in at 51% support from likely voters. Trump furthermore leads his election opponent in Arizona by one point and in Georgia by two points; this places the president at 49% in Arizona and 48% in Georgia.

All of these diffs are within error margin. pic.twitter.com/E9krcbt4yl

The 45th president’s lead over the former vice president comes as the latter relies on media ads to carry his presidential campaign across the finish line. Throughout the 2020 race, Biden has repeatedly taken a dialed-back approach that contrasts with President Trump getting out and about before the people he wants to vote for him. 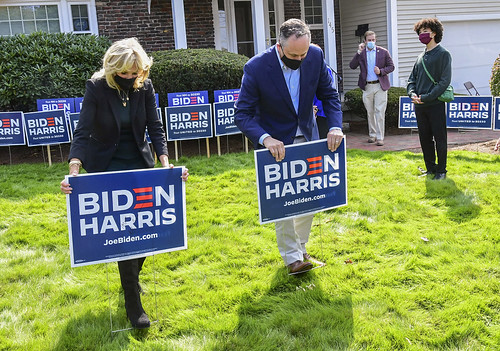 Debate experts and political pundits have already stated that the former vice president lacks the proper preparation for tough questions from moderator Chris Wallace and challenges from President Trump.
The president himself has publically gone on the record and stated that he’d like himself and Biden to take drug tests prior to the first presidential debate. Trump also warned that the former vice president’s allies may attempt to give him certain drugs to enhance his debate performance.
Do you think President Trump will continue to strengthen his leads over Biden in battleground states? Let us know down below in the comments section.