Trump: I "Look Forward to" 2020 Election Against Biden

As Joe Biden faces considerable issues in his own presidential campaign, he is attempting to redirect attention by going after Trump. America has witnessed this on multiple occasions. The former vice president’s decision to attack Trump’s response to coronavirus is just one of the latest examples. 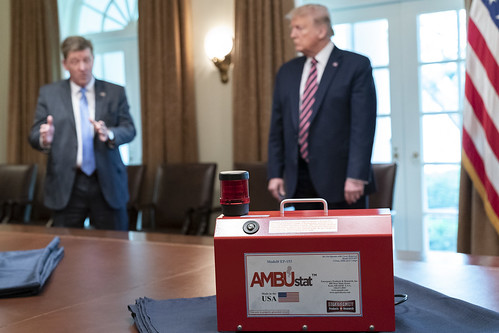 The new narrative coming out of the Biden camp is that the president has a vested interest in holding up the general election. Of course, the presumptive Democrat nominee has not a shred of evidence to support such ludicrous accusations.
On Monday, President Trump denied and pushed back against Biden’s baseless claims while speaking to the press, reports Washington Examiner.

When speaking to reporters yesterday, the president confirmed that he’s actually looking forward to the upcoming general election. Trump dismissed Biden’s assertions about wanting to interfere with the election as “made-up propaganda.” It’s important to note that the former vice president’s untrue claims about Trump arrive as more evidence supporting Tara Reade’s story continues to materialize.

"That was just made-up propaganda, but not by him."@realDonaldTrump dismisses any talk of delaying the election, saying he was never thinking of doing it, despite @JoeBiden saying "mark my words" claiming Trump would try and delay it "somehow." pic.twitter.com/uwR5ubZSRY

Before the president concluded his remarks to the press, he stated that November 3 is a “good number” that he is eagerly anticipating.

What’s most ironic about Biden’s accusation of Trump wanting to postpone the election is the level of projection. After all, it is Democrats who are discouraging traditional voting and pushing for mail-in voting; it goes without saying that having citizens mail in their votes significantly increases the propensity for cheating and other forms of election fraud.
How do you think the rest of the 2020 presidential election will play out due to coronavirus? Will the Democrats get their way and manage to cram mail-in voting down Americans’ throats? Let us know what you think in the comments section below!

Rises In The Percentage Of Americans Who Carry Loaded Firearms