Election Day is here and millions of Americans are in polling lines across the nation. Those who have not already voted have the final opportunity to do so today and make their voice heard.
Last night, President Trump and Joe Biden made their final cases to the American people. The president thanked his supporters for their energy and enthusiasm before noting the series of steps he’ll continue taking to Make America Great Again.
Meanwhile, Biden made a spectacle of himself, attacking Trump without offering any real substantial solutions. The “battle for [America’s] soul” is something that the former vice president repeatedly talked about, however. 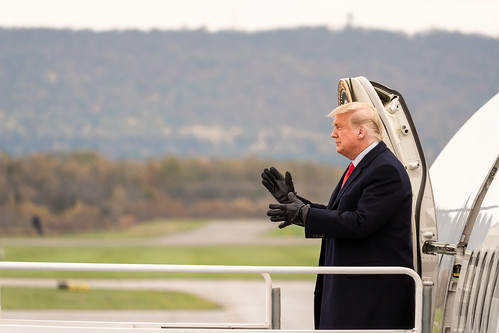 This morning, President Trump gave a phone interview to Fox & Friends. According to Fox News, this phone interview entailed Trump’s thoughts about the election, his campaign, and the overall morale as Americans cast their votes at the ballot box.

What to Know About Trump’s Election Day Interview

While speaking with Fox & Friends, Trump confirmed that his morale and the morale of his team is quite high. The president stated that everyone “[feels] very good” and remains confident that a Trump 2020 victory will ultimately prevail.

To all of our supporters: thank you from the bottom of my heart. You have been there from the beginning, and I will never let you down. Your hopes are my hopes, your dreams are my dreams, and your future is what I am fighting for every single day! https://t.co/gsFSghkmdM pic.twitter.com/fLek4keQ1t

During this interview, the president also shared some remarks for any voters who may still remain undecided even on Election Day. Trump noted that prior to COVID-19, Americans enjoyed the best economy on the face of the earth; likewise, the president also reiterated that his re-election will ensure that the economy continues to bounce back and reflourish.
Last but not least, came Trump’s warning that if Biden got into office, he wouldn’t last very long, nor would he “call the shots.”

Many Americans believe that President Trump will ultimately win the 2020 presidential election, even if it’s a close win.
With that in mind, different communities across the country are already bracing for violence and civil unrest. Multiple left-wing activist groups are threatening to loot, riot, and cause disturbances if and when Biden loses the 2020 presidential election.

Therefore, businesses in major Democrat cities are boarding up to shield their shops from anticipated unrest. The White House has also beefed up security to avoid the possibility of mobs attempting to storm the premises.
How do you think this 2020 presidential election will turn out? We want to know your outlooks and predictions on this race in the comments section below!