The upcoming presidential debates between Trump and Biden are becoming increasingly more talked about.
Despite certain Democrats pushing for Biden to walk back his promise to debate the president, the former vice president’s campaign has stated that he’ll be there. Earlier this week, Trump’s re-election campaign penned the Commission on Presidential Debates, asking for either a fourth debate or a re-scheduling of one debate prior to early voting. 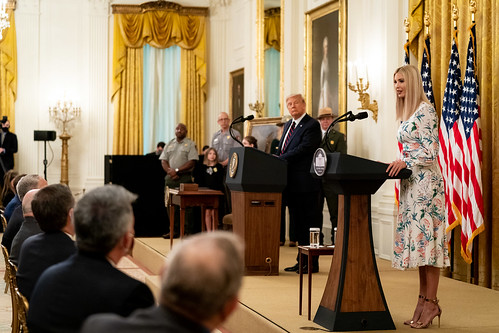 The Commission on Presidential Debates subsequently declined, stating that both candidates would have to agree to such modifications.
This, in turn, led to another letter from the Trump 2020 campaign; this time, however, the president’s team wants assurance that Biden will appear in-person for the debates against Trump, confirms Breitbart News.

While the former vice president has committed to debating the president three times, Biden hasn’t committed to debating Trump in person, face-to-face. The Trump campaign is privy to this and therefore seeking the guarantee that Biden “will definitely appear on stage” with President Trump for the debates.
Additional pointers in the Trump re-election team’s letter to the Commission on Presidential Debates asserts that Biden should also refrain from debating via “online transmissions” where outside assistance could be made available to him.

Finally, the Trump 2020 team noted Biden’s ongoing habit of campaigning from his basement, even while the president is out and among the American people.

Will Biden Commit to Three In-Person Debates Against President Trump?

At this time, the former vice president has not spoken out or directly committed to refrain from online means of debate participation. Biden’s election campaign also remains silent on the matter as things currently stand.
Judging from Biden’s social media accounts, he is more interested in going after Trump than committing to clean, forthright debates before the American people.

It didn't have to be this bad. pic.twitter.com/xwdxgizLLH

The former vice president also remains in hot water for remarks he made earlier this week when discussing the Latino and African-American communities; more than once, Biden asserted that while the former is a diverse group, the latter is not. Since facing backlash, the former vice president has since attempted to walk back these remarks.
Do you think Joe Biden will commit to debating President Trump in-person or will he try to do so via online communication? Let us know what you think will happen in the comments section below!