Over the past several days, the left has touted the idea of Biden backing out from his promised three debates with President Trump.
The New York Times recently published an op-ed calling for an end to presidential debates; this arrived after Democrat aide Joe Lockhart also urged Biden not to engage in debating the president. 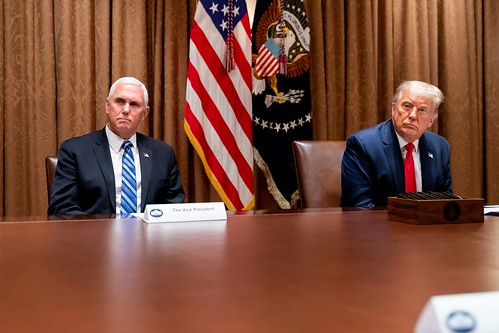 What’s happening here is quite clear, even with just the slightest understanding of political nuance. The left, for all intents and purposes, is setting the tone and putting out the idea of Biden withdrawing from general election debates, debates which happened to be traditional hallmarks in general, presidential elections.
However, President Trump’s re-election campaign is countering this push. In fact, Washington Examiner reports the Trump 2020 team’s new push for more debates with Biden and sooner debates than the ones currently scheduled.

The Push for More Than Three Trump-Biden Debates

During a Fox & Friends interview, Trump campaign manager Bill Stepien clearly vocalized the re-election team’s interest in getting Trump and Biden on debate stages more often and sooner than priorly planned.
Stepien explained that early voting happening in sixteen various states across the nation is a good enough reason for more debates more often. Americans have a right to get a clear and full picture of which candidate they are voting for, even if this means re-working previously arranged dates and times.

Democrats are already trying to give Joe Biden the cover not to debate.
@BillStepien is spot on: Americans deserve to see the contrast between @realDonaldTrump’s America First Agenda and Biden’s far-left agenda on the debate stage! pic.twitter.com/n23P9PHqaQ

The Trump campaign manager additionally pointed out the left’s “trapdoors” for Biden to skip out on debates altogether. Stepien assured Fox & Friends, along with the show’s viewers, that the president’s campaign will “keep applying pressure” to the former vice president’s team for more and sooner debates.

Right now, Biden’s campaign has yet to offer a response to the left urging him to renege on debates or to President Trump’s re-election team calling for more debates to happen sooner.
The former vice president’s allies continue to work on managing his unfiltered interactions with the media. During the few times that Biden has conversed with reporters in the past several weeks, he’s also declined to answer direct questions.

Campaign Manager @BillStepien on people urging Biden not to debate: Team Trump takes "our cues from the American People…they are the ones who want to see candidates on the debate stage” pic.twitter.com/9pDtgK221x

Reversing course and choosing not to debate President Trump would undoubtedly hurt Biden politically. However, Democrats’ true fear lies in Biden going forward with his three promised debates and letting the nation get a truly unfiltered, live look at their nominee for president.
Do you think Biden will wind up debating President Trump? Will the Trump campaign get their wish and manage to persuade Biden’s team to agree to more than three debates, sooner than planned? Let us know down below in the comments section.