As the 2020 election plays out, certain polls have indicated that Joe Biden is leading President Trump. Of course, it’s also important to remember that virtually all 2016 election polls stated that Hillary Clinton would beat Trump by a landslide, yet that didn’t pan out so well.
In the wake of polls alleging Biden in the lead, the former vice president is attempting to build off this momentum. Earlier this week, Biden held a gathering with no enthusiasm and circles on the floor to keep individuals six feet apart from one another. The lack of excitement and energy was all but tangible. 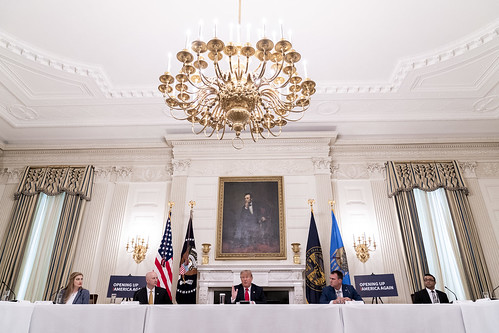 Yesterday, Trump 2020 campaign manager Brad Parscale sat down with Fox & Friends to talk about the current presidential election, reports Breitbart News.
During this time, Parscale reminded Americans of Biden’s declining mental capabilities before stating that the former vice president’s “handlers” are trying to prevent him from openly speaking.

Parscale on Biden and the 2020 Presidential Election

The Trump 2020 campaign manager stated an obvious truth: Americans are not energized or excited when it comes to Joe Biden.
This is evident in how voters responded to Biden, as opposed to how they respond to Trump. The former vice president can barely fill a room; meanwhile, Trump supporters are lining up outside of the Bank of Oklahoma (BOK) Center days ahead of time for his rally.

It’s no wonder his handlers keep him under wraps … because he’s a mess!

Additional pointers made by Parscale noted the ways in which the Democrat nominee is being managed by his “handlers.” The Trump 2020 campaign manager professed that Biden’s team ultimately tells him what to say and hopes that he doesn’t go off script or embarrass himself yet another time.

The outdoor stage for @realDonaldTrump’s Rally in Tulsa being built.

This will be the 1st time that POTUS speaks to BOTH crowds in person – inside & outside.

If you come to the rally and don’t get into the BOK Center before it’s full, you can still see the President in person! pic.twitter.com/7hoLFgzvLA

Finally came Parscale’s note that Americans want to see how Biden can handle himself without “the media filter” and four walls of his basement. The Trump 2020 campaign manager then concluded the interview by admitting that he feels sorry for Biden.
Do you think Joe Biden will continue to manage as the 2020 presidential election plays out? Let us know down below in the comments section.