One day remains until the arrival of Election Day. At this time, both the Trump and Biden campaigns are making their final pitches to the American people and urging folks to get out and vote.
Yesterday, President Trump went across the country and held five different rallies. Trump will host another five rallies today while some of his adult children also campaign for their father in different parts of the country. 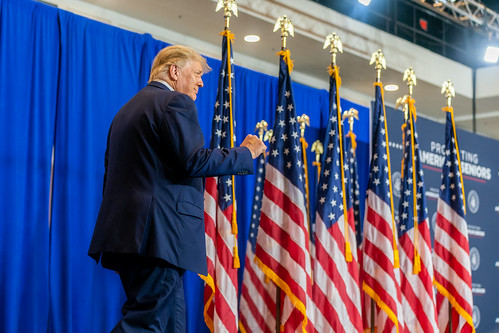 Meanwhile, the Biden campaign is sending out Kamala Harris to stump for a Biden presidency. Yesterday, Harris spent time in Georgia’s Gwinett County with the hopes of attracting more support in the battleground Peach State.
At this time, Washington Examiner confirms that the final pitches of both Trump and Biden largely revolve around COVID-19.

Wrapping Up the 2020 Presidential Election

COVID-19, the economy, and the steps that Americans should take going forward are each factors in Trump and Biden’s final pitches to the nation.
Under the president’s leadership, the economy has bounced back from coronavirus shutdowns big time, with a GDP to the tune of 33.1%. Furthermore, Trump remains committed to a safe, continued reopening with no national mask mandates or vaccine mandates. The president is also very much aware that the nation cannot take another shutdown without sustaining irreparable and unspeakable damages.

President @realDonaldTrump: Under my leadership, our economy is now growing at the fastest rate EVER RECORDED! pic.twitter.com/5cXDbwoXuf

Biden, on the other hand, is presenting a very different message. He continues to claim that the 45th president lacks a strategy for getting coronavirus under control; yet, Biden’s COVID-19 plan is to shut down the nation again, force Americans to wear face masks, and slap even more restrictions and regulations upon struggling businesses.
President Trump is drawing a contrast between himself and Biden, stating that if the former vice president is elected, economic depression and the collapse of American freedoms will follow.

Tomorrow is the last day that Americans will have to vote for who they want as their next president. Trump, his re-election team, and supporters remain confident that a victory of four more years is imminent.

Show off your (virtual) I voted sticker!

Biden and his supporters, on the other hand, appear more nervous. Liberals and Democrats have admitted that minority turnout for Biden in battleground states is far below what it ought to be. Furthermore, it’s as plain as day for all to see that Trump’s rallies and events are pulling in many more attendees than Biden’s functions.
RNC chairwoman Ronna Romney McDaniel maintains that a surge in Republican voters tomorrow will carry Trump across the finish line to a second term.
Do you want Donald Trump or Joe Biden as president of the United States? Which COVID-19 plan are you most in agreement with? Let us know in the comments section down below!