In this year’s presidential election, Florida has swiftly become a major battleground state. At this time, both President Trump and Joe Biden remained focused on winning Florida; both candidates have campaigned in the Sunshine State and the president even went to West Palm Beach for early voting. 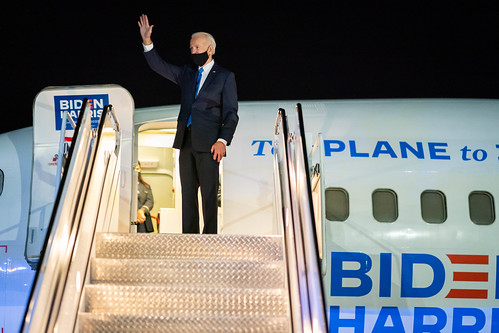 In 2016, Trump won the state of Florida, albeit by very close margins. According to a Trafalgar Group survey, the president is leading Biden in the Sunshine State; however, certain reports indicate that the race in Florida is expected to be close, yet impactful upon the election’s ultimate outcome.
Fox News documents the time that both the Trump and Biden teams have spent on extensive campaigning in Florida.

Getting Out the Vote in Florida

The president has rallied in Florida multiple times this month and participated in other campaign events. Trump remains optimistic, noting the “tremendous spirit” in Florida while also shining light on the news that he’s doing well in the Sunshine State.
Yesterday, Vice President Mike Pence, too, spent time in Florida. Pence reminded Floridians of the strength and prosperity that will come along with another four years of President Trump in the White House. Likewise, the vice president called for residents of the Sunshine State to get out and vote.

President @realDonaldTrump: Obama wouldn’t endorse Biden because he was in SHOCK he even won the nomination pic.twitter.com/jkhmHGIaGQ

Meanwhile, Biden’s campaign is also working hard in Florida and trying to win the state, come November 3. The 44th president traveled to Miami yesterday and spoke to state residents during a drive-in rally. Obama explained to the audience that the outcome of the 2020 presidential election will impact the United States for “decades to come.”
Finally, Obama urged Florida to vote (for Joe Biden and Kamala Harris). He also told Miamians that “every single one of us” is necessary in order for Democrats to get their desired election outcome.

Getting the Win in Florida

As both campaigns make their final cases to American voters, early voting is already underway. At this time, data on early voting shows that Republicans are beating out Democrats in Florida big time. Many conservatives are taking this as a positive indicator that Trump will ultimately prevail in the Sunshine State.

Vice President @Mike_Pence: As Joe Biden talks about shutting down our economy again, we are opening up America! pic.twitter.com/tfqxh2iolz

Florida Governor and Republican Ron DeSantis also seems confident that Trump will win Florida, just as he did in 2016. Weeks ago, DeSantis professed that Biden’s policies of shutting down the economy and increasing taxes would never get a cosign from Sunshine State residents.
Do you think President Trump will win the state of Florida in the 2020 presidential election? Be sure to share your thoughts and opinions with us in the comments section below!