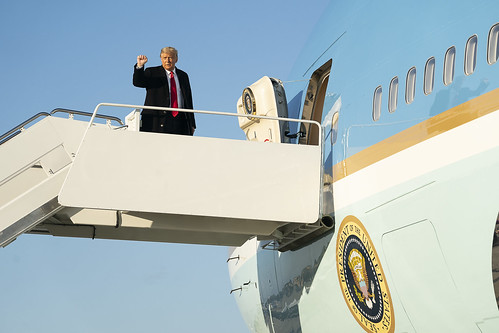 From coronavirus to race relations, election integrity, and more, both candidates presented very different visions and plans for the future of our nation. Trump repeatedly held Biden to task as a failed politician who will say anything to get elected, while having done nothing over a nearly five-decades long political career.
With now 11 days left until November 3, President Trump and Vice President Mike Pence are hitting the campaign trails today, as are Joe Biden and Kamala Harris, per Fox News.

This Friday, President Trump will be spending time in Florida. Certain polls have shown the president with a slight lead over Biden in the Sunshine State; however, winning Florida is still very important. Expanding the present lead over Biden in Florida can only benefit the Trump campaign.

Joe Biden asked us to make this video. #Debates2020 pic.twitter.com/UAk5MDitgX

The president is expected to not only rally in multiple Florida cities, but he’ll also promote early voting. Trump will encourage Republicans to vote early in the Sunshine State while also taking his own advice. Reports indicate that Trump will vote today in West Palm Beach.
As the 45th president campaigns, rallies, and votes in Florida, the vice president shall travel to Pennsylvania and Ohio. Both of these areas are viewed as key battleground states in the 2020 election.

While Trump and Pence spend time in Florida, Pennsylvania, and Ohio, Joe Biden will be in Delaware. While in the state, the Democrat presidential candidate will share remarks about COVID-19 and a return to economic prosperity.
Both of these subject matters came up during last night’s debate. Trump repeatedly panned Biden for the latter’s prior admission that he’d shut down America’s economy again if the right bureaucrats advised him to do so.

Joe Biden after last night's debate: "My time is up." pic.twitter.com/8VRYqvI5c3

While the former vice president speaks in Delaware today, his running mate, Kamala Harris, will be in Georgia to promote early voting amongst Democrats. While in Georgia, Harris will make various appearances in Atlanta, the state’s capital and a city strongly concentrated with Democrats.
What were your thoughts about last night’s final presidential debate of 2020? What do you make of today’s plans for the Trump and Biden campaigns? Be sure to let us know down below in the comments section.