On Tuesday, September 29, President Trump and Joe Biden will meet for the first presidential debate. The debate will promptly begin at 9:30 PM EST and last for 90 minutes. The Ohio-based Shiela and Eric Samson Pavilion is set to host the debate.
With a little more than a week before the first presidential debate, many Americans already have their thoughts and predictions. 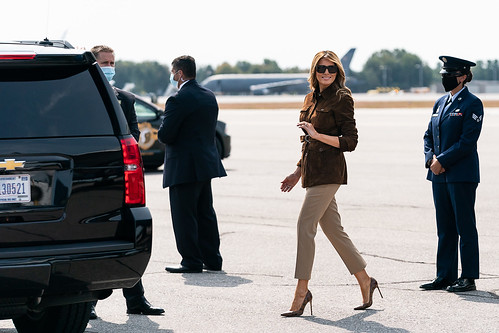 Some have stated that Biden will mysteriously and conveniently come down with something prior to the debate, hence giving him a way out. Meanwhile, other Americans believe that Trump will absolutely wipe the floor with Biden and embarrass him before the nation.
Yesterday, Trump publicly mulled over his upcoming debate against Joe Biden as he rallied with supporters in North Carolina; during this period, the 45th president suggested that Biden might be on drugs in order to give him an extra boost, reports Breitbart News.

While speaking about the presidential debates, Trump warned that the nation shouldn’t “underestimate” the former vice president.
The president then explained that despite Biden’s countless blunders, he’s remained in politics for nearly half a century. Shortly thereafter came a prediction from the president; Trump professed that Biden could very well be given drugs to enhance his debate performance and avoid political damage.

TRUMP ON DEBATING BIDEN: "They give him a big fat shot in the ass and he comes out…. and for 2 hours, he's better than ever before."

Therefore, the president wants both himself and Biden to take a drug test prior to next week’s presidential debate. Trump stated that this is something his campaign will specifically ask for.
Finally, the president also ripped Biden’s two prior failed runs for the presidency. Trump explained to his supporters that Obama choosing Biden as his running mate during the 2008 presidential election is what ultimately gave “one percent Joe” any political relevance whatsoever.

Will Biden Agree to a Drug Test?

At this time, the 2020 Democrat nominee has not publically responded to President Trump’s calls for them to each take drug tests.

@JoeBiden when are you going to stop running on the "I hate Trump" campaign and start telling us what your policies and promises are? What are they Joe? Tell me why I should vote for you.

Instead, Biden has chosen to edit bits and pieces of clips from Trump’s rallies and then turn them into campaign ads. The former vice president also joined the bandwagon of politicizing the recent death of Supreme Court Justice Ruth Bader Ginsberg.
Per the former vice president, Ginsberg’s passing is all the more reason that Biden “must win.”
Do you think that Trump and Biden should both agree to take drug tests before the first presidential debate? Let us know in the comments section below!