Human trafficking serves as a blight upon the world. With countless groups and individuals dedicated to taking on human trafficking, progress has come; yet, there’s still much more work to be done.
Yesterday, the U.S. State Department reached its 20-year milestone in combatting human trafficking. 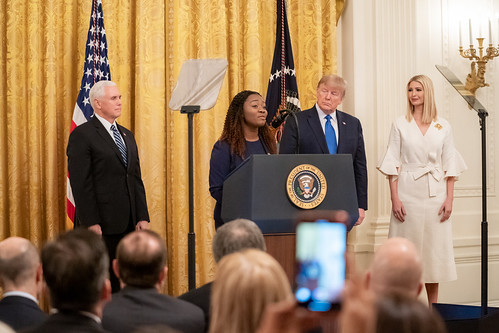 It’s important to note that earlier this year, the Trump administration hosted a summit to discuss and shed light on their work to oppose human trafficking. President Trump, first daughter Ivanka Trump and others also met with survivors of human trafficking to hear their stories.
Yesterday, the first daughter acknowledged the State Department’s arrival at the 20-year milestone of fighting against human trafficking, confirms Breitbart News.

What to Know About 20 Years of Fighting Human Trafficking

Two decades ago from yesterday marked the signing of America’s Trafficking Victims Protection Act. This particular piece of legislation subsequently paved the way for the Office to Monitor and Combat Trafficking in Persons within the State Department.

Maxwell Matewere of Malawi is being honored for his tireless dedication to improving Malawi’s anti-trafficking response. He was the driving force behind the passage of the 2015 Trafficking in Persons Act and continues to advocate for its full implementation. #EndTrafficking pic.twitter.com/FFtz5fra9y

While acknowledging the State Department’s work against human trafficking, Trump explained the considerable amount of work left in the war against “modern-day slavery.”
The State Department’s Trafficking in Persons (TIP) shows that over the past 20 years, 146 individuals received honors as TIP reporting heroes. These individuals come from 75 different countries altogether.

According to Secretary of State Mike Pompeo, Ivanka Trump has played a tremendous role in making the fight against human trafficking a centerfold matter within the Trump administration. This comes in addition to other responsibilities of the first daughter.
Since the president’s time in office, great strides maintain in the quest to end human trafficking. Some examples include, but are certainly not limited to, the following: allowing nearly half a billion dollars towards combatting both labor and sex trafficking and signing an executive order to do away with virtual avenues of child exploitation.

Sophie Otiende of Kenya is being honored for her leadership role in the development of victim assistance infrastructure, resources, and practices. With her expertise, Otiende set up systems for the first shelter exclusively for victims of trafficking in Kenya. #EndTrafficking pic.twitter.com/65GjQg7WnJ

Likewise, President Trump has also made it a point to reduce assistance towards governments doing little to nothing to take on human trafficking.
Additional information from Secretary Pompeo included the acknowledgement of certain places that have taken strides against human trafficking; some of these places include Namibia, Singapore, and Bolivia.
What do you think about the State Department’s 20-year milestone in the fight against human trafficking? Did you know about the White House’s human trafficking summit earlier this year? Let us know down below in the comments section.