As a part of the effort to end the partial government shutdown, Senate negotiators have floated drastic restrictions on the detention of criminal illegal aliens which would dramatically limit the number of illegals ICE could detain.
A source close to the negotiations tells The Daily Caller that the Senate is discussing limiting bed space operated by Immigration and Customs Enforcement to only those illegal immigrants detained by the U.S. Border Patrol. The source noted that ICE rarely arrests illegal aliens for simply being in the country illegally and that it would significantly reduce the number of aliens that ICE could detain and deport.
Homeland Security officials fear that the policy change would endanger states and localities who wish to cooperate with ICE in the transfer of criminal illegals. The source close to the process could not say what exactly these restrictions were being considered in exchange for by Republicans.

A U.S. Border Patrol agent wears a black band over his badge during a memorial service for slain comrade Brian Terry on January 21, 2011 in Tucson, Arizona. Agent Terry was killed during a December14 shootout with suspected bandits near the U.S.-Mexico Border. Thousands of Border Patrol agents and fellow law enforcement officers from across Arizona turned out for the memorial service held at Kino baseball stadium in Tucson. With U.S. agents tracking drug smugglers and illegal immigrants all along the border, the region is one of the most militarized areas of the United States. (Photo by John Moore/Getty Images)

Former acting ICE Director Thomas Homan told TheDC the proposals were “absolutely ridiculous” and that in effect “every jail in the country would be a sanctuary jail.” Homan continued that local communities put criminal illegal aliens in jail because they are an obvious threat to their community and that such a change in ICE’s ability to operate would endanger public safety.
“If I was a Republican this is not something I’d consider,” Homan declared. The former acting ICE director also continued, “If they want to give us less beds then we’re back to catch and release,” adding, these restrictions “would make matters worse.”
The White House and Senate Majority Leader Mitch McConnell’s office did not respond to a request for comment.

A U.S. Border Patrol flag hangs in front of the sector office in the Big Bend area of west Texas on November 22, 2017 near Van Horn, Texas. Federal agents are searching for suspects in the death of U.S. Border Patrol agent Rogelio Martinez, 36, and a fellow agent who was severely injured while responding to “activity” near Van Horn. The FBI is leading the investigation. (Photo by John Moore/Getty Images)

The White House is currently engaged in extensive negotiations with party leaders in Congress as President Donald Trump demands $5 billion in funding for a proposed barrier along the U.S. southern border before he will end the partial government shutdown. Vice President Mike Pence, acting Chief of Staff Mick Mulvaney, and other aides have been seen on Capitol Hill in recent days parlaying with legislators.
Democratic congressional leaders Nancy Pelosi and Chuck Schumer have declared that they will not appropriate a single dollar in taxpayer funds towards a border wall and are only willing to provide approximately $1.3 to 1.6 billion in “border security” funding. 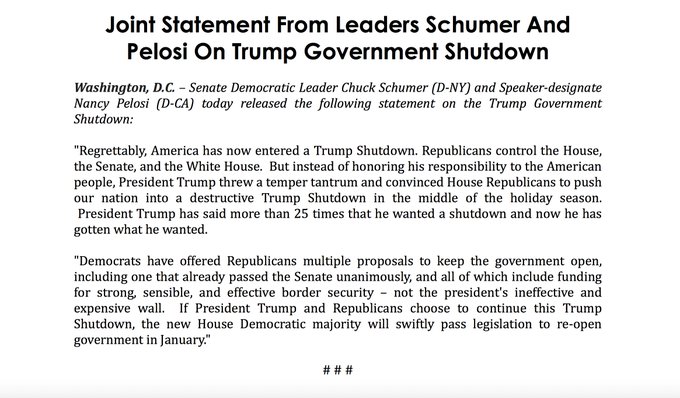 Regrettably, America has now entered a #TrumpShutdown. My statement with @NancyPelosi: