The quality of leadership in the Republican Party is more important than ever. The GOP is in a unique position at this time in our nation’s history; not only are Republicans tasked with combatting and defeating Democrats’ radical socialist agendas, but there remains a continuous fight to preserve the integrity of presidential elections.
Most Republicans across the country maintain their backing of President Trump as his campaign takes legal action against voter fraud. This is a process that continues to play out and will likely remain ongoing for weeks. 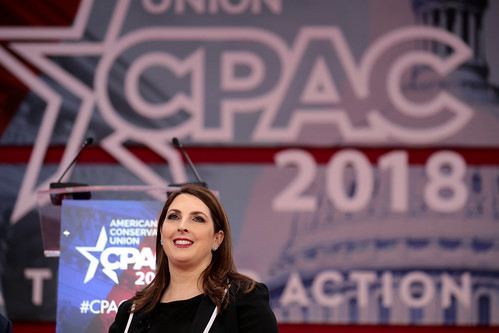 In spite of the liberal media crowning Biden as “president-elect,” voting irregularities, tabulation errors, and other instances of foul play are very much present. On another note, the liberal media does not have the power to determine who is elected to lead the nation.
Republican National Committee chairwoman Ronna McDaniel is a prominent figure in the GOP’s fight against voter fraud. Just yesterday, President Trump endorsed McDaniel to continue heading the RNC, according to Newsmax.

What to Know About Trump’s Endorsement of McDaniel

The 45th president took to social media to endorse McDaniel’s continued leadership. Trump praised the RNC chairwoman’s guidance, proclaiming that she has his “full support and endorsement” to proceed.

I am pleased to announce that I have given my full support and endorsement to Ronna McDaniel to continue heading the Republican National Committee (RNC). With 72 MILLION votes, we received more votes than any sitting President in U.S. history – and we will win!

The president also made mention of the ongoing 2020 presidential race; Trump explained that with over 72 million votes and more than any other sitting president, he will win re-election.
Yesterday’s endorsement of McDaniel marks Trump’s second time of backing her. The RNC chairwoman also received support from the president in 2017, following his win of Michigan in the 2016 presidential election.

The Process for Determining the RNC’s Chair

In January 2021, Republican National Committee members will convene with one another to cast a vote on whether or not McDaniel maintains her position as chairwoman. During this period, the weight of President Trump’s endorsement will be seen.
However, in the meantime, McDaniel and other GOP allies of President Trump remain in support of his legal challenges.

The American people deserve to have faith in our elections.

That’s why the RNC is going to pursue this process to the very end. pic.twitter.com/T9RQDdBl27

During talks with Fox News earlier this week, McDaniel explained that Americans’ confidence in the honesty of the U.S. electoral process is important; this is why McDaniel and other Republicans remain committed to seeing through all litigation and investigations of voting irregularities.
What do you think about President Trump’s endorsement of Republican National Committee chairwoman Ronna McDaniel? What is your take of her leadership of the RNC? We want to know your thoughts down below in the comments section.