Portland, Oregon is a major American city that continues to struggle with violence.
For all intents and objectives, Ted Wheeler, the local mayor, has abdicated his role. Over the months of social unrest and violent demonstrations, the Portland mayor has refused to take real and effective action to bring this to a head. 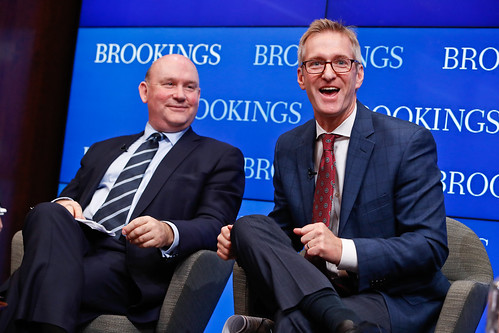 “Mayor Tim Bowles of West of England and” (CC BY-NC-ND 2.0) by BrookingsInst

However, new information from Townhall reports that riots reached a new level on Friday.
Due to the Portland mayor’s outright admission that he will not allow federal authorities to come to the city and bring an end to violence, rioters have subsequently taken over his apartment complex.

What to Know About the Situation in Portland

On Friday, Wheeler tweeted out a copy of a letter that he sent to President Trump. Upon reading the letter, observers can see that Wheeler declined the president’s offer to send federal officials into the city to stop ongoing riots.

Today, I sent this letter via email to @realDonaldTrump declining his recurring offer to aid Portland by sending federal enforcement to the city. https://t.co/W85EDfriyk pic.twitter.com/CC1IWTp5k8

The Portland mayor stated “no thanks” in the written letter; Wheeler then professed that individuals who engage in criminal behavior will face “apprehension” and “prosecution.” Despite these claims, however, violence continues to ravage the city; although, tensions escalated even further after the Portland mayor publicized this letter.
On Friday, demonstrators descended upon the apartment complex of Mayor Wheeler. Furthermore, activists maintain that they won’t evacuate the premises until the Democrat mayor agrees to completely abolish the local police department and meet other demands.

Numerous Americans maintain that riots happening in Portland and other communities are way beyond George Floyd or Jacob Blake. Moreover, many of the leftist demonstrators are making demands that far surpass points about “police brutality” and social justice.
Conservatives remain critical of the Portland mayor’s failure to allow federal law enforcement into the city. Even certain Democrat leaders, such as the Wisconsin governor, have called in the National Guard to get unruly disturbances out of control.

And won’t leave until he abolishes the police completely, right?

This is the stuff the corporate media intentionally ignores

We are in a radical revolution
pic.twitter.com/wN1vLLZ10n

Ultimately, Wheeler’s publication of his letter to President Trump seems to have emboldened rioters. The Portland mayor’s assertion that lawbreakers will be held legally accountable doesn’t appear to align with real-time Portland situations.
Do you think the Portland mayor made the right call in keeping federal law enforcement officials out of the city? Do you believe Mayor Wheeler will wind up defunding the Portland Police Department? Be sure to share your thoughts in the comments section down below!