The inherent danger of allowing violent rioters to run amuck in America continues to prove itself.
It’s important to understand that these chaotic demonstrations taking place in the streets of our nation are escalating with each passing night. 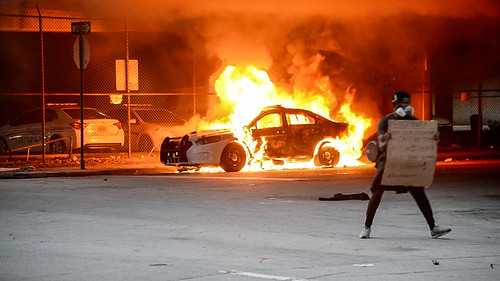 Rioters aren’t listening to mayors who try to reign them in with curfews; if anything, the lack of real consequences is emboldening these people to up the ante, becoming even more dangerous in their rioting, looting, vandalizing and pillaging of America.
For the most part, violent riots have taken place in America after sundown; however, this changed on Tuesday. Reports from Breitbart News confirm that rioters descended upon a Best Buy store in California and used a forklift to break into the building.

What to Know About the Attack on Best Buy

Shocking images and videos appeared on social media yesterday. In this documentation, looters were seen using a forklift to smash the front door and windows of a Best Buy in Fairfield, California.
What makes this particular incident notable is its occurrence in broad daylight, rather than during the dark of night like other disturbances. This shift in M.O. shows that rioters are getting bolder and less concerned with consequences for their lawless behavior.

Looters Use Telescopic Forklift To Break Into Best Buy In Fairfield, California pic.twitter.com/PKIkjAeKU6

The gradual escalation in behavior is something that many Americans have warned of; yet, it continues to happen before our very eyes. Thankfully, however, law enforcement officers managed to arrive on the scene before looters were able to enter Best Buy and take off with any merchandise.
There have been additional reports of looting in California this week, marking a continuation of last week’s fiasco.
What do you think about rioters escalating and behaving lawlessly in broad daylight? What consequences do you think looters should face for their crimes? Sound off with your opinions in the comments section below!