In certain political circles, there are debates about the fighting styles of Democrats and Republicans. Over the past several years, some conservatives have raised concerns that while the left aggressively goes after the right, the latter is constantly on defense and responds passively.
These are pointers that first son Donald Trump Jr. brought up while speaking with a Washington Secrets interviewer. The first son discussed his latest book which is called ‘Liberal Privilege: Joe Biden and the Democrats’ Defense of the Indefensible.’ 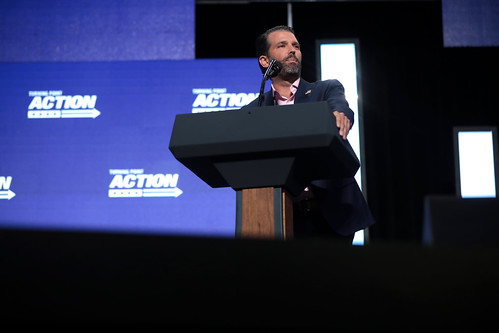 “Donald Trump, Jr.” (CC BY-SA 2.0) by Gage Skidmore
According to Washington Examiner, Don Jr. believes that it is time for Republicans to cease playing “T-ball” and employ some of the strategies of the political left.

A Closer Look at the Advice for Republicans

The eldest first son stated that in the GOP’s belief that they’re taking the moral high ground over the left, Republicans are actually “losing all along the way.”
Don Jr., in essence, explained that it’s time for conservatives to begin playing hardball; one notable and suggested example came when the first son suggested that Republicans go after leftist PAC groups and other organizations with strong ties to the left.

The fake news media disinformation campaign has begun. These people are a disgrace to what use to be a noble profession. Absolutely disgusting. https://t.co/AUTAH25OGv

The first son explained that these are the tactics being employed by the Democrats. Just last month, Americans learned of the New York attorney general’s decision to target the National Rifle Association (NRA). This decision is being written off as purely political and coincides with the points made by the first son.

Will Republicans Take the Advice?

Time and future events will tell whether or not Republicans take a more aggressive approach to politics. The first son’s advice definitely mirrors the fighting style of his father, President Trump.
As Americans know, the president makes no bones about speaking candidly and being aggressive when necessary. Trump also repeatedly blasts various policies of the left that would endanger the nation; supporters of the president tend to enjoy his style of politics, stating that it contributed to his 2016 election win.

Why would a presidential candidate need to give someone a script to ask him some questions at a town hall? How much further can they take this charade??? https://t.co/Pfgwv44cJS

‘Liberal Privilege’ is a book largely centered around Joe Biden, the various scandals surrounding him, and the things that he’s managed to get away with. Like his father, the eldest first son is also extremely critical of the former vice president in speeches and on social media.
What do you think about Donald Trump Jr.’s advice to Republicans? Should the GOP get more aggressive when going up against the Democrats? Be sure to let us know your thoughts in the comments section below!