Police Under Attack from NYC Mayor

This time is challenging for many police officers across the nation. Law enforcement is under siege like never before. Whether it’s from violent rioters throwing objects or Democrat mayors agreeing to reduce funding to local police departments, morale amongst those who protect and serve is down big time.
Unfortunately, leftist leaders are doing little to nothing to improve the morale of police officers across the nation. In fact, many Democrat leaders have fed into the narrative that law enforcement is inherently and systemically racist. 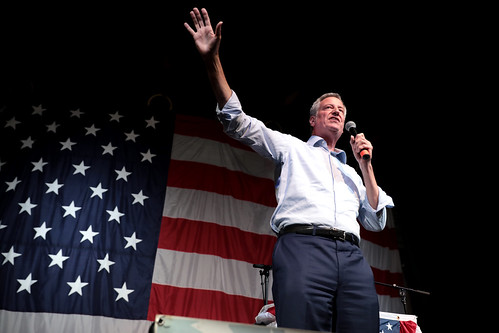 While speaking with reporters, Mayor De Blasio tore into the NYPD’s Sergeants Benevolent Association (SBA). After accusing members of this association of pushing hate and deeming them as unworthy of his respect, the New York City mayor claimed that the SBA doesn’t “help move us forward” or “create anything good.”

To date, these are some of the most flagrant and outright verbal attacks that police officers have faced from leaders in power. Despite ripping into police officers, the New York City mayor has not indicated any willingness to forego law enforcement protections for himself or his family.
The above rhetoric from De Blasio will only embolden others who hate officers and even wish to see them dead.

Response from the Sergeants Benevolent Association

Needless to say, the SBA did not waste any time in issuing a public response to strong remarks from the New York City mayor. SBA President Ed Mullins thanked De Blasio for being honest for “the first time since he’s been in office.”

I’m at City Hall with the latest updates. https://t.co/RMQicjQIrl