In less than 24 hours, Americans have learned that Trump staffer Hope Hicks, President Trump, and First Lady Melania Trump each tested positive for COVID-19. Hicks was first to test positive, seeing as she underwent screening after showing COVID-19 symptoms; later, the president and first lady were also screened, hence the positive results. 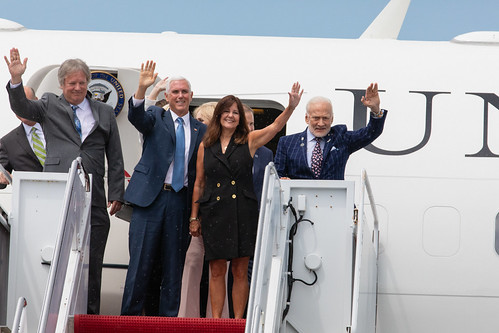 This morning, news of the first couple testing positive quickly spread across the world. Various leaders, politicians, and other public figures wished the Trumps a speedy recovery; moreover, the positive tests led to questions about whether or not Vice President Mike Pence and Second Lady Karen Pence are positive for the virus, seeing as they work in close proximity with Trump.
As of today, Washington Examiner reports that both the vice president and his wife tested negative for COVID-19.

What to Know About the Pences and COVID-19

As a top member of the Trump administration, Pence is tested for coronavirus every single day. Seeing as both Pence and the second lady are not positive for the virus, there are no reports that they will self-quarantine; meanwhile, both President Trump and the first lady announced earlier this morning that they will self-isolate, in light of their positive tests.

Karen and I send our love and prayers to our dear friends President @realDonaldTrump and @FLOTUS Melania Trump. We join millions across America praying for their full and swift recovery. God bless you President Trump & our wonderful First Lady Melania.

On Friday, Pence also put out a statement after news confirming the positive COVID-19 status of President Trump and the first lady.
The vice president stated that he and his wife send prayers and love to the first couple; likewise, Pence noted that he and his wife join many other Americans in wishing the president and first lady a speedy recovery.

What’s Next for the Trump Campaign?

At this time, President Trump and the first lady have announced that upcoming events which demand their involvement are on hold.
However, there are no reports that the vice president will not be able to continue his work on behalf of the Trump administration and Trump re-election campaign. Next week, on October 7, Pence will go against Kamala Harris in the vice-presidential debate. Assuming this debate goes through, the positive coronavirus status of President Trump and the first lady is likely to come up.

Kamala Harris said it was “outdated” and “wrongheaded” to view police as the only way to make communities safe. Under President @realDonaldTrump, this Vice President and this Administration, we will ALWAYS Back the Blue. We’re not going to defund the police—not now, not ever. pic.twitter.com/gTypWOg8st

Last month, reports surfaced that former 2020 Democrat Pete Buttigieg is preparing Harris for next week’s debate by posing as Pence.
What do you think upon learning that the vice president and second lady’s tests for coronavirus came back negative? Are you looking forward to next week’s Pence vs. Harris debate? Be sure to let us know down below in the comments section.