The 2020 presidential election continues to capture national headlines. Everyone in the country has their own perceptions and reactions to the ongoing race; nevertheless, the Trump campaign and the president himself remain committed to fighting for a fair and free election.
Last week, U.S. Attorney General William Barr gave the Justice Department the OK to probe evidence-backed claims of voting irregularities and fraud. This news comes as Dominion Voting Systems faces scrutiny for “glitches” and computing errors that exclusively benefit Joe Biden. The fact that owners and investors of Dominion are also linked to Democrats isn’t even the tip of the iceberg. 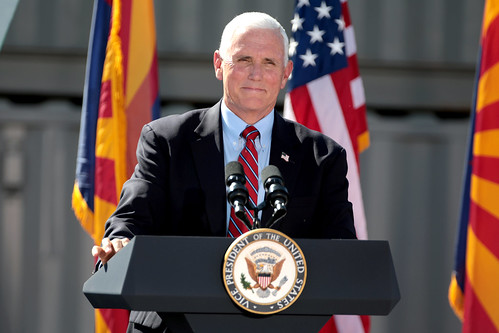 Last week, Vice President Mike Pence spent time in Virginia to attend the Council for National Policy (CNP) gathering; while in Virginia, Pence offered reassurance to the many Trump supporters who are passionate about this presidential election, according to Breitbart News.

During the vice president’s remarks at the CNP meeting, members of the audience passionately called for “four more years” of Trump in office. Pence assured that a second Trump term is “the plan” before sharing more information.
Per the vice president, Trump, his legal team, and campaign will not cease fighting until the counting of legal votes and removal of illegal votes are completed. Likewise, Pence also reiterated that the Trump team will never relinquish the work to “make America Great Again.”

During additional remarks made in Virginia, the vice president also spoke about the danger of what Democrats have planned for the nation. Pence noted that while the current administration seeks American greatness, an open economy, lower taxes, fewer regulations, and more, Democrats want precisely the opposite.
More than once, Democrats and their mouthpieces have professed support for socialism, open borders, packing the Supreme Court, and so much more.

Pence’s remarks in Virginia arrived closely to the release of President Trump’s interview with the New York Post.
While talking with the publication, the president spoke about cheating and fraud that happened in the 2020 presidential election. Trump mentioned Dominion Voting Systems, its propensity for systemic errors, and ties to left-wing owners and investors.

Thank You All! What A Great #MarchForTrump! #MAGA 🇺🇸 https://t.co/xx7rD2nXCP

At this time, the fight for four more years is far from over. Trump’s personal attorney, Rudy Giuliani, has recently taken a more prevalent role in the president’s litigation regarding election integrity. At this time, Americans will have to wait and see what arrives next.
What did you think of the remarks from Vice President Mike Pence in Virginia? Do you still see a path to four more years for President Trump? Let us know in the comments section below!