Congress ultimately failed in putting together a stimulus package for Americans who are still bearing the brunt of COVID-19 shutdowns.
Since this failure, Democrats have repeatedly attacked GOP members in the press. Top Democrats are accusing Republicans of “begrudging” and “distrusting” American workers.
Liberals in power furthermore maintain that the GOP is playing politics with people’s lives and futures; however, Democrats are considerably less vocal about how their own demands contributed to the congressional stalemate, hence President Trump signing an executive order on Saturday. 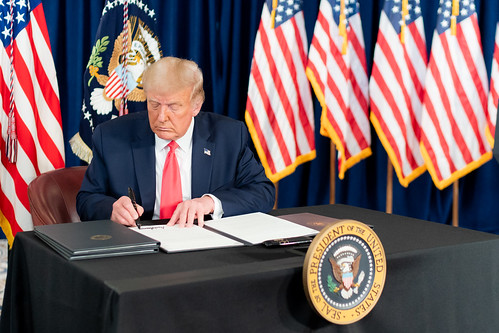 Under the president’s executive order, Americans who qualify will receive $400 in weekly jobless aid along with certain other benefits.
Not only has Trump signed this executive order, though, but he has also shed light on moves Democrats attempted to make behind the scenes, according to Breitbart News.

Many Americans have wondered why Congress was ultimately unable to reach an agreement on stimulus aid for the nation’s citizens. Now, if you listen to Democrats, you’ll hear that the impasse was triggered by Republicans’ refusal to accept $600 per week in unemployment checks.
What Democrats aren’t talking about is their own interests they attempted to squeeze into a stimulus package. However, President Trump shed light on this matter while interviewing with Breitbart News.

President @realDonaldTrump: Democrats are meddling in the 2020 Election by insisting on mail-in ballots when there’s corruption all over the place with them pic.twitter.com/S3Haz3kb7K

The 45th president informed that congressional Democrats sought to give bailout money to states that tanked their own economies; Trump also spilled the beans on Democrats’ interest in putting funding towards a plan for mail-in voting. The president warned that such a plan would be tantamount to “a rigged election” and “one of the great messes of all time.”
In addition to providing $400 in weekly unemployment payments, Trump also OKed a payroll tax reduction. This reduction will benefit both workers and their employers.

While the president’s executive order is in effect, the battle of our nation’s election security is far from over.

In real time, Democrats are working behind the scenes and in the courts to push for mail-in voting. According to the left, voting in person is simply too dangerous and risky; however, when rioting, looting, and other forms of criminal activity happen in person, Democrats call it “peaceful protest.”
Republicans have stated that if citizens can riot in person, they can also vote in person.
What do you think about Democrats’ attempts to sneak funding for state bailouts and mail-in voting into the coronavirus stimulus package? What do you make of President Trump’s latest executive order? Sound off with your thoughts in the comments section below!