Joe Biden and his political allies remain hard at work to get him back into the White House. The former vice president has already put out a series of written plans and policies that he’s vowed to implement should he win the election this November.
However, in Biden’s quest to make it into the Oval Office as president, he’s had to walk certain things back. The Democrat nominee had repeatedly gone on record vowing to sign a national mask mandate into law; Biden also confirmed during an interview that he, as president, would shut down America if scientists urged him to do so. 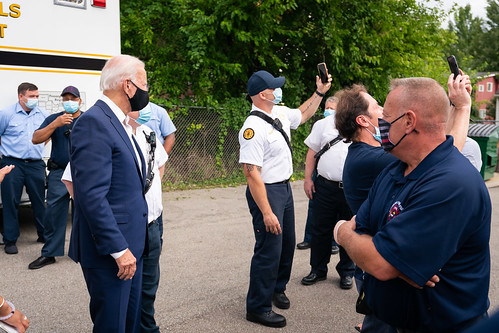 “Pizza Delivery and Visit with Local Fire” (CC BY-NC-SA 2.0) by Biden For President

After weeks passed and subsequent backlash ensued, Biden did an about-face. Now, the former vice president’s story is that he doesn’t see a need for a future shutdown; Biden likewise maintains that he’d put pressure on state leaders, local officials, and business owners to implement mandatory mask requirements.
On Saturday, Biden also added new names to his planned White House transition team, according to Washington Examiner.

The Latest on the Biden White House Transition Team

At least in the public eye, the former vice president is presenting a confident disposition and belief that he will win the 2020 election.
As such, Biden announced on Saturday a list of individuals that will become part of his White House transition team. Sally Yates, Pete Buttigieg, Susan Rice, and Vivek Murthy are a few names to come up.

As president, I will:

I’m ready to work on day one to contain the spread of this virus and get our country back on track.

Following the release of names for the Biden transition team, the former vice president’s team also issued a statement. Per the admission of Biden’s political team, his planned move into the White House shall be a “transition like no other.”
Finally, the former vice president’s political allies assert that he’ll be ready to lead the country “on day one.”

What is Biden’s Plan for America?

The Democrat nominee has repeatedly maintained that he plans to “build back better.” Of course, “better” means very different things to different Americans.
For instance, the former vice president has talked about a ban on fracking, increased regulations, and “redirecting” funding from law enforcement. Biden also maintains that he’ll push for mandatory gun buybacks and move against the National Rifle Association.

This is our moment to root out systemic racism and ensure justice finally rings out for all in America. pic.twitter.com/mXzAZ9VZfR

As such, Americans should know that the individuals on Biden’s transition team share his idea of “better” when it comes to “building back” America.
What do you think about the names listed on Biden’s White House transition team? Be sure to share your thoughts with us in the comments section below!