Most Americans Worried About Crime Across the Nation

For many weeks now, the American people have read about waves of crime in major U.S. cities.
Some examples of lawlessness that regularly endanger lives and businesses in certain localities include rioting, looting, arson, and even attacks on federal courthouses. 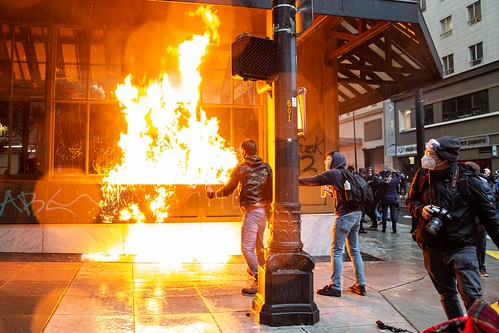 It gets worse, though: not only have Democrat mayors in these cities refused to stop criminal acts, but they have also attacked the president for sending in federal troops to stop these exploits of viciousness. Liberals in power furthermore continue to maintain that vandalism and other similar acts are that of “peaceful protests.”
A new poll conducted by Huffington Post/YouGov shows that a vast majority of Americans have concerns about crime in the country; these poll findings arrive as President Trump tears into Democrat candidate Joe Biden for his permissive, lackadaisical attitude towards lawlessness, reports Breitbart News.

A Closer Look at Americans’ Concerns About Crime

Findings from the Huffington Post/YouGov show that 85% of voters believe that crime in the United States is either “somewhat serious” or “very” serious. Concerns about lawlessness across the nation also maintain across all racial demographics.
Interestingly enough, concerns about crime do not greatly vary based upon partisanship or political leanings either. 90% of Republican voters view crime as either “somewhat” or “very” serious while 81% of Democrats and 80% of swing voters share the same outlook.

Here is today's #MAGAMinute on President @realDonaldTrump's emphasis on rule of law, public safety, and protecting our protectors.

You would not be safe in Joe Biden's America. pic.twitter.com/K2aslaBzO1

However, perception of crime does vary when socioeconomic status is taken into account. For instance, merely 37% of Americans earning at least $100,000 annually believe that crime is “very” serious. Now, contrast that with the 47% of lower-middle-class people who view crime as a “very” serious issue, along with the collective working-poor and working-class.

How Will Concerns About Crime Impact the 2020 Presidential Election?

America is having some very serious conversations right now, many of which revolve around police, crime, and law and order.
President Trump continues to maintain his status as a law and order president. Trump has received endorsements from multiple police organizations in addition to taking executive action to protect civilians and officers.

Florida Sheriff: “Now more than ever before, America needs a president who stands strong with our law enforcement officers.” pic.twitter.com/Ck7Be40cSY

Biden, on the other hand, is all for defunding the police. The former vice president is additionally on record admitting that he would essentially demolish the safety and community of suburban areas as president.
All of this will play a role in the 2020 presidential election. To date, the Trump campaign continues to slam Biden for his poor and weak stance towards upholding the rule of law.
What do you think about crime in the United States? How do you believe concerns about lawlessness will impact the 2020 presidential election? Sound off with your viewpoints in the comments section below!