Most Americans Want Law and Order

Law and order has taken center stage in the political and social conversations happening throughout the nation.
Despite the left’s untrue conflations between riots and peaceful protests, the American people know the difference between the two. The former involves destroying property and placing the lives of other people at risk, while the latter does not. 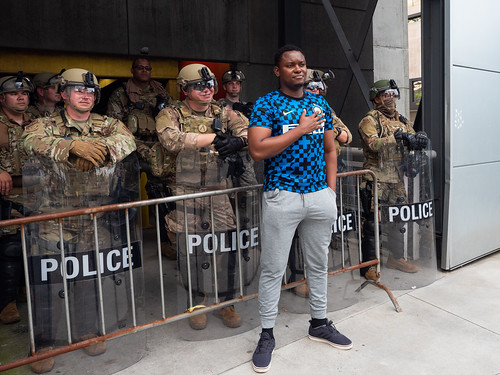 In light of the calls to disarm, defund, and abolish police, law and order is facing serious threats like never before, with Democrats leading the charge. Fortunately, though, the vast majority of Americans understand why law and order is so paramount, according to Washington Examiner.

The American People on Law and Order

According to a study from Monmouth University, 65% of Americans maintain that upholding law and order is a “major concern.” Additional findings from the survey show that 48% of polled individuals believe that President Trump will do the best job at ensuring the presence of law and order in the United States.

It’s no secret that the actions of rioters pose a grave threat to law and order in the country. Burning down shops, looting small businesses, and attacking police officers each embody crime and anarchy, neither of which are conducive to a healthy, civil society. More information from Monmouth University shows that Americans are aware of this.
Less than 25% of Americans now believe that the conduct of rioters is excusable. This marks a decline from higher approvals of demonstrations during this summer. All in all, Americans are getting tired of watching communities burn.

Trump vs. Biden on Law and Order

The 45th president has never wavered in his support for law and order.
This explains why a plethora of police associations and law enforcement groups have come out to back his campaign. In Trump’s plans for a second term, he’s already explained how he will work to protect police officers and allow them to do their jobs as safely as possible.

That is a very big bug, Joe!pic.twitter.com/NYvGMy0UQI

Biden, however, is in a very different boat. For the longest time, the former vice president shied away from condemning rioters; he even once talked about “redirecting” funding from police departments…which is tantamount to defunding the police.
After much hammering and political pressure, the Democrat nominee somewhat changed his tune. Biden has since attempted to convince the nation that he’s not on board with defunding the police or allowing rioters to rip through communities.
What do you think about the new survey on where Americans stand regarding law and order? Share your thoughts with us in the comments section below!