Throughout the 2020 presidential election, Democrats have downplayed the threat and existence of voter fraud; they’ve denied the reality that mail-in ballots do create a greater propensity for fraud while also attempting to steamroll their way through this race.
Republicans, on the other hand, are saying not so fast. Right now, reports of voter fraud, unlawful votes, and other worrisome scenarios continue to materialize. 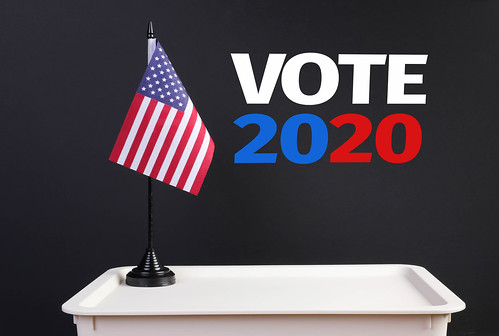 “Ballot box with American flag and Vote 2” (CC BY 2.0) by wuestenigel

The nation is at a point where Democrats are blocking Republican ballot watchers from overseeing the counting of ballots; they’re also calling states very prematurely and feigning as if the media decides who wins the presidency.
Despite the left’s ignorance of reality, voter fraud remains very much alive. According to the Philadelphia Republican Party, numerous deceased persons have cast votes in the 2020 race, confirms Breitbart News.

Voting from the Grave

The Philadelphia GOP spilled the beans yesterday after reviewing the Pennsylvania website. Republicans in the liberal stronghold city were able to determine whether or not the persons passed away, based upon the age of the voter, ballot tabulation, and other details.

These are some of the people who voted in #PA…

See it here for yourself: https://t.co/HmQixKGFuz

It gets even worse when one considers that more than 21,000 dead persons are still reportedly on the voter rolls in Pennsylvania. This news arrives as the media rushed to call Pennsylvania for Joe Biden just yesterday; meanwhile, the state is still under court orders to separate ballots which were turned in after Tuesday, November 3.
President Trump’s re-election campaign asserts to have evidence of voter fraud in Pennsylvania and other areas; last week, Team Trump also gave a press conference warning that while they would ultimately win the state, Democrats are trying to steal it from Trump.

The Integrity of the 2020 Race

Right now, the integrity of this presidential election remains very much absent. It is common knowledge that both Republican and Democrat ballot watchers are supposed to oversee the ballot counting process; yet, Democrats are doing all that’s possible to keep the GOP out.

Meanwhile, Michigan, Georgia, and other places across the nation are reporting clerical errors, tabulation errors, and a series of other irregularities. Despite the mainstream media’s declaration that Biden is now “president-elect,” Republicans maintain that the race is not over until votes are fully counted and until litigation has reached its end.
Thus far, both vote counts and litigation remain underway with much more to come.
What do you think about the increasing instances of voter fraud popping up across the country? We want to get your thoughts in the comments section below!