Social outrage ensued on Monday following graphic footage of George Floyd dying in police custody.
This footage quickly made the rounds on social media, where Floyd was seen pinned to the ground with an officer’s knee on his neck. Floyd repeatedly stated that he couldn’t breathe, yet the officer still declined to remove his knee from Floyd’s neck; this later led to Floyd dying and four officers involved in the situation were terminated from their positions. 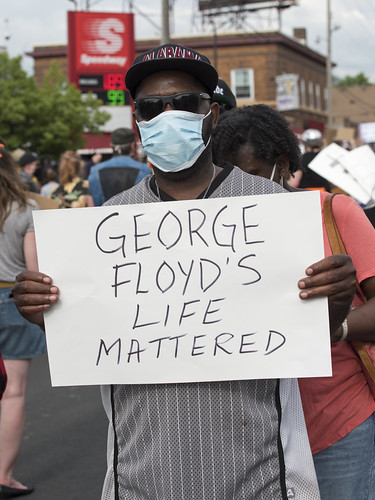 “Protest against police violence – Justic” (CC BY 2.0) by Fibonacci Blue

Since the death of Floyd, Black Lives Matter protesters in Minnesota have taken to the street, not to protest, but to riot.
Reports from Breitbart News confirm that Minnesota rioters spent Wednesday night partaking in the destruction, arson, and outright rampage of Minneapolis.

What to Know About the Riots in Minnesota

Last night’s riots in Minneapolis escalated to shockingly dangerous and violent levels. Graphic social media footage confirmed that rioters broke into Target, completely looting and ravaging the store.
This behavior also took place not long after an AutoZone store in the area was set on fire. Smoke could be seen coming out of the building and many employees evacuated the premises for their own safety.
See some of the shocking video footage for yourself:

Smoke is still billowing out the windows of the Autozone near the Minneapolis police Third Precinct. Flash bombs going off on nearby blocks. Demonstrators are still out in south Minneapolis to protest the death of #GeorgeFloyd pic.twitter.com/lJWgowK1ty

Meanwhile, Target still being looted. It’s been over 3 hours. Many are wearing masks. pic.twitter.com/LZ4dAGHgMT

Around midnight, the riots reached even more intense levels with Minnesota Black Lives Matter people tossing fireworkers at police officers and firefighters. Many firefighters were forced to arrive on the scene in order to stop the blazes caused by looters lighting up AutoZone.

At this time, it remains unclear how rioters believe that AutoZone, Target, and other impacted businesses played a role in the hands of Floyd’s death. However, looting, arson, and destruction of property still maintain their status as serious criminal offenses, regardless of the perpetrators’ outrage or personal reasons.
What do you think about the riots from Black Lives Matter people in Minneapolis? Does the death of George Floyd justify looting, arson, and tossing fireworks at police and firefighters? Share your thoughts with us in the comments section below!