In the 2020 election, the state of Michigan is a key battleground area where electoral votes are ripe for the pickings.
According to a recent Trafalgar Poll, President Trump is leading Biden in the state of Michigan. The former vice president, for his part, has campaigned in Michigan and heaped praises upon Democrat Governor Gretchen Whitmer. 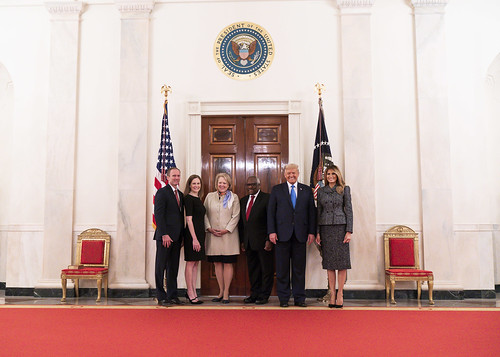 However, many Michiganders aren’t pleased with the way their governor has responded to coronavirus. This was evidenced by a petition that garnered more than 500,000 signatures in the state; this petition later led to the repeal of Michigan’s 1945 emergency powers law.
The discontent that so many Michiganders suffer from in the state could explain the strong support for President Trump. Yesterday, Trump spent time in Michigan to rally with supporters, notes Breitbart News.

The Latest Trump Rally in Michigan

On Tuesday, Trump spoke with supporters in Lansing for roughly 90 minutes. While rallying, the president covered economic resurgence, recovery from COVID-19, and other issues that are affecting the country.
Likewise, the president also hit Biden multiple times. Trump held his Democrat rival accountable for repeatedly calling lids and disappearing from the public eye in retreat to his basement. In calling out the former vice president for lackluster campaigning, Trump also put his own record on display before Michiganders.

President @realDonaldTrump: We are up 3 in #Michigan – there is going to be a great RED WAVE! pic.twitter.com/uChwK4Yqd8

Trump explained that he is “working [his] *ss off” to win the 2020 election and the facts support this. The president’s rally in Lansing happened before he traveled to Nebraska and Wisconsin for two more rallies. This isn’t new for the president, however; he regularly travels to multiple states in one day, holding high-energy rallies in each of them.

Ahead of the 8-Ball

As the election wraps up, turnout for various political events has become a prevalent theme; this is, in part, due to the massive turnout that Trump generates, contrasted by the minimal show-ups for Biden’s events.

President @realDonaldTrump in #Michigan: Your governor is a disaster – OPEN UP YOUR STATE! pic.twitter.com/oDRAD0xQ8W

This, too, is a matter that the president talked about while in Lansing. He spoke about the enthusiasm and large crowds for his campaign; likewise, the president signaled that the intense and compelling excitement for his re-election run will signal a victory of four more years.
Needless to say, Trump’s remarks in Lansing were extremely well-received by the audience of his supporters.
Do you think President Trump will win the state of Michigan in this year’s presidential election? Be sure to let us know in the comments section below!