Michigan Residents Get a Clear Look at Biden's Policies

The contrast in policies between President Trump and Joe Biden presents very different visions for America going forward. The president wants to continue reducing Americans’ taxes; meanwhile, Biden aims to increase taxes by ending policies that raised deductibles and the child tax credit.
With three days left until the 2020 presidential election, both candidates are campaigning with a passion. Despite each candidate working across the nation to win votes, election data has already shown that Biden is struggling to get support from minority voters in battleground states; meanwhile, President Trump is raking in new endorsements. 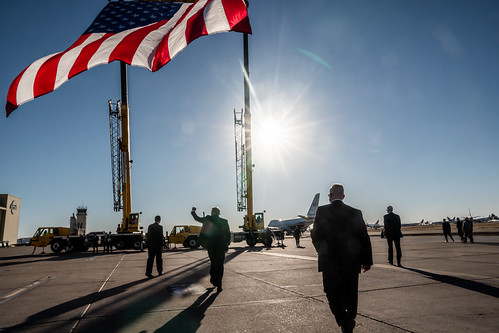 Trafalgar Group findings show that President Trump is beating Biden in Michigan, yet another battleground state. Moreover, Breitbart News confirms that the president traveled to Michigan yesterday to campaign with voters and warn against the horror of Biden’s policies for workers.

On Friday, the president spoke with a crowd of his supporters at a rally in Waterford Township. During his speech, Trump explains how Biden’s policies have hurt so many workers in Michigan, especially amid recoveries from COVID-19 shutdowns.
The president stated that Biden ultimately “twisted the knife” in Michiganders’ backs by supporting the NAFTA trade deal and China’s entry within the World Trade Organization. After explaining how Biden’s policies have worked against the best interest of Michigan workers, the president explained how his own policies are assisting Michiganders.

Only YOU can prevent this nightmare, America. pic.twitter.com/U5nSYrFL0o

After noting his replacement of NAFTA with the U.S.-Mexico-Canada (USMCA) trade deal, Trump explained how his presidency has engendered a boost in auto production. Finally, the president vowed that if he wins re-election on Tuesday, he’ll continue ensuring that auto jobs and other employment opportunities remain in Michigan.

Shutting Down the Country

While Michigan residents and many others have suffered from Biden-supported policies, the situations will become a lot worse if he gets into office.

The Second Amendment and Gun Rights are on the ballot November 3.

❌ Biden wants to BAN the most popular firearm in America

Trump mentioned this while in Waterford Township as well, noting the extent to which Biden would allow rioters to run amuck as president. This, along with Biden’s support for closing America’s economy down again, abolishing police, mandating face masks, etc., is what the Democrat ticket of 2020 has to offer Americans.
What do you think about the impact that Biden’s policies have had upon Michigan workers and others? Have you already voted in this year’s presidential election? We want to know your ideas in the comments section below!