The importance of bringing political violence to a head is something that most Americans recognize. Communities will not be able to maintain themselves if riots, looting, burning of buildings, etc., are happening on a nightly basis.
Over the past several weeks, Republicans in various levels of government have made moves to stop the destruction of American cities. Some of these moves entail legislation that would further penalize rioters and also cause them to lose voting rights along with access to COVID-19 aid. 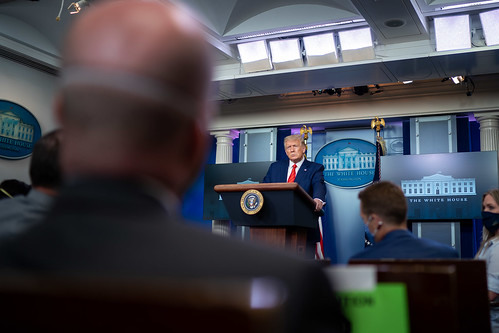 However, while looking to get the riots under control, many people have their own thoughts about which sources are most responsible. According to President Trump, the mainstream media has played a role in egging on riots and anarchy, per Breitbart News.

How the Left-wing Press Contributes to Violence and Destruction

While speaking with reporters, Trump stated that the media is more responsible for contributing to violence than even Joe Biden. In making this point, the president explained that while Biden “doesn’t even know he’s alive,” the mainstream media is “fueling” riots by stoking anger.
Trump then noted the media’s decision to ignore the reality that one of his supporters was executed in the streets of Portland. Since this incident, White House press secretary Kayleigh McEnany has stated that the Trump supporter’s death could have been prevented if Portland Mayor Ted Wheeler called in the National Guard.

Is it just me or did one of the White House press laugh (around 22-23 seconds in) when Kayleigh McEnany stated a Trump supporter was killed? pic.twitter.com/fV65cOYN3J

Another element in the mainstream media’s contribution to destructive riots deals with the conflation of peaceful protesters and violent agitators. Conservatives have repeatedly explained that burning down buildings, looting small businesses, and throwing bricks at law enforcement do not constitute acts of peaceful protest.

Bringing an End to Violence

Over the past week, the Department of Homeland Security (DHS) has made some announcements regarding the violence which continues upending American cities.
Days ago, DHS Secretary Chad Wolf warned that if the Portland mayor doesn’t get his city under control, the federal government will have to intervene. Wolf also maintains that DHS won’t stand by while Americans face needless deaths.

Already, multiple riots across the nation have resulted in various deaths. As Democrat leaders continue refusing the assistance of the National Guard and federal government, Americans are suffering. Riots — and strategies to stop them — are furthermore playing a role in the 2020 presidential election.
Do you believe the mainstream media is egging on violence and anarchy in this country? Be sure to let us know in the comments section below!