Kamala Harris Called Out for Most Liberal Senate Voting Record

When Kamala Harris became Joe Biden’s running mate in this year’s election, she willingly agreed to the scrutiny that comes along with this position.
As someone who is seeking to become vice president of the United States, Americans are entitled to know more about Harris, what her policies are, etc. 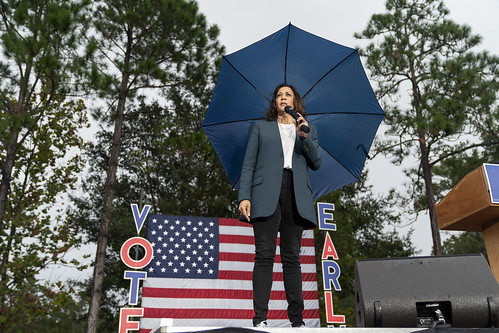 “Rally at University of North Florida – J” (CC BY-NC-SA 2.0) by Biden For President

This is especially true since both Biden and Harris have spoken about a “Harris-Biden administration” on multiple occasions; the former vice president’s repeated misstatements, flubs, and odd behaviors are already responsible for beliefs that he wouldn’t make it through a single term in the White House.
Over the past weekend, Harris sat down for an interview; what she did not expect, however, was to be called out for her exceedingly liberal voting record in the Senate, according to Townhall.

The Most Liberal Senator in U.S Congress

Harris is on record supporting the Green New Deal, a minimum wage increase, ban on fracking, etc., Not only does the California senator support these radically left policies, but she also votes for them.
Now, many Americans believe that Vermont Sen. Bernie Sanders is the most liberal; however, GovTrack, a non-partisan legislation tracking website, confirms that Harris is the most liberal senator within the U.S. Congress.

WATCH: CBS Norah O'Donnell reminds Kamala Harris she has the most left-wing voting record in the Senate after she tries to deny it.

"Well, actually, the non-partisan GovTrack has rated you as the most liberal senator." pic.twitter.com/jj4k59JHVs

This past weekend, CBS’ interviewer Norah O’Donnell informed Biden’s running mate about this while interviewing her. Harris’ response was to laugh and first state that Vice President Mike Pence was the one who referred to her as the most liberal senator; however, O’Donnell pushed back, noting GovTrack’s classification of Harris.
The woman who wants to become vice president of the United States responded by merely smiling and laughing loudly. Viewers who observed this exchange took to social media to comment on the awkwardness of Harris’ response.

As the 2020 presidential election gets closer to its completion, Harris continues to go on the attack against President Trump.
The Democrat vice presidential candidate falsely maintains that Trump lacks a plan for dealing with coronavirus; she’s also accused the president of being a racist, while using false and debunked talking points to make her case.

Earth to Kamala Harris, GovTack ranked you the most liberal Senator.

Meanwhile, as Biden calls a lid on public events, Harris seems to be the true leader of the Biden campaign. This directly aligns with both Biden and Harris’ talks about a “Harris-Biden administration” in the White House.
Did you know that Kamala Harris’ voting record in the Senate is even more liberal than that of Bernie Sanders’? What did you think about Harris’ response to Norah O’Donnell when confronted about her voting record? Let us know down below in the comments section.