Democrats’ fear of the president directly speaking with his supporters is common knowledge at this point. You see, whether the left admits it or not, they know that Joe Biden doesn’t have a snowball’s chance of beating Trump; yet, they’re still holding onto their false sense of hope.
For the sake of shifting the odds in the former vice president’s favor, the unhinged, vicious left is trying to sabotage Trump. The nation witnessed this when Democrats sued to block the president from convening with supporters in Tulsa, Oklahoma last weekend. Needless to say, Trump went on to have a great rally on Saturday night. 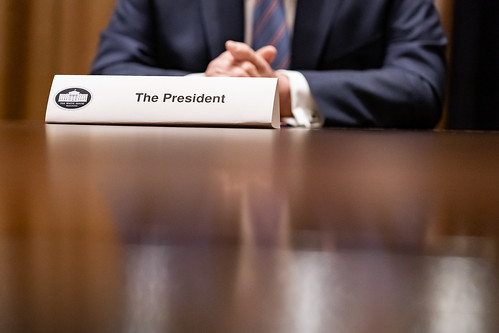 Democrats aren’t done trying to sabotage the president though, not by a longshot. As a matter of fact, Breitbart News reports that Governor Gretchen Whitmer (D) is looking to altogether block Trump from hosting rallies in the state of Michigan.

The Possibility of Whitmer Running Interference Against Michigan Trump Rallies

In recent days, the Michigan governor has preached about the alleged “dangers” of people gathering together without face masks and social distancing.
Of course, Whitmer had a very different attitude regarding George Floyd and Black Lives Matter gatherings; the governor attended these gatherings herself and failed to follow her own social distancing directives.

Wearing a mask isn’t about making a political statement or an admission of fear. It’s pretty simple — we wear a mask because we care about others. #MaskUpMichigan pic.twitter.com/wOoL4HyipX

Now, Whitmer maintains that she’s “very seriously” looking into ways to halt President Trump from holding rallies in the state of Michigan. However, the Democrat governor does admit that she’s, thus far, unaware of available legal action she can take to ban Trump rallies from Michigan.
What Whitmer fails to understand is that the face mask and social distancing ships sailed the moment that leftists and health “experts” gave passes to Black Lives Matter protests and rioters; none of these large gatherings contained social distancing and many participants did not wear face coverings.

For George.
For Ahmaud.
For Breonna.

I will never be able to fully understand the pain that Black and Brown communities are forced to bear, but I will spend my life fighting for the justice and peace that everyone deserves. pic.twitter.com/Nz9NpcHHnt

Do you think the Michigan governor has any legal room to stop President Trump from holding rallies in the state? Let us know in the comments section below!

New PRIVACY INFRINGEMENT from TSA Will Have Your Skin Crawling