Over the past several months, multiple giant corporations have thrown financial support behind left-wing groups.
These corporations claim that such financial support is important to them and fosters a culture of equality and inclusiveness. However, many Americans disagree with this sentiment; in fact, different leftist groups have made no bones about using violence, fear, and intimidation to get their way. 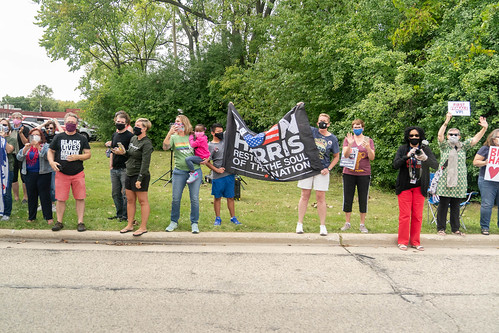 As time passes, more and more people are beginning to notice the holes in left-wing talking points about America. Corporations, on the other hand, appear to be falling for it hook, line, and sinker.
This is why President Trump criticized giant corporations yesterday while speaking with supporters in Henderson, Nevada, as confirmed by Breitbart News.

The Truth About the Radical Left and Giant Corporations

The line for the Trump Rally in Nevada:
pic.twitter.com/itfdM8J6uK

The president then explained that the above would be a best-case scenario, while noting the probability of an even worse outcome. Trump then suggested that huge corporations give their money to the families of fallen law enforcement officers, rather than to leftist groups who seek to tear down the nation.

Why Are Giant Corporations Supporting the Radical Left?

There are several running theories as to why so many huge corporations are throwing millions of dollars at radical, leftist groups.
One theory asserts that the organizations have a personal stake in the game and are seeking to gain leverage somehow. By contrast, other Americans believe that giant corporations want to appear “woke” or simply avoid invoking the wrath of the radical left.

Now, two officers in LA are fighting for their lives.

This needs to end now.

And woke corporations need to stop funding organized hatred of the police. pic.twitter.com/a3TVoe03Bg

Either way, numerous conservatives have grown tired of the leftist pandering. Some have warned that they’ll take their dollars elsewhere to smaller businesses that aren’t supporting Marxist organizations like Black Lives Matter.
Why do you think so many giant corporations are throwing their financial support behind the far left? Do you agree with President Trump’s criticisms of these businesses? Let us know in the comments section below!