President Trump and Joe Biden have each campaigned extensively in the state of Florida. The conservative state is now one that analysts are considering a battleground state; this has prompted Trump and Biden to fiercely work to win the electoral votes which the Sunshine State has to offer.
Ivanka Trump, Vice President Mike Pence, and other Trump people have traveled to Florida on multiple occasions to foster support for the president. On the other hand, Barack Obama and Kamala Harris have extensively campaigned on Biden’s behalf in the Sunshine State. 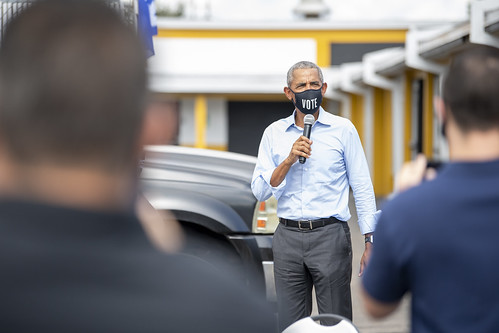 Right now, there are four days left until the 2020 presidential election; the latest news about early voting in Florida is good for Trump, yet not so good for Biden, confirms Townhall.

What to Know About Early Voting in the Sunshine State

Not only are Florida Republican early voters outweighing their Democrat counterparts, but leftist outreach in the state is failing miserably.
Right now, several polls have Trump beating Biden in Florida; meanwhile, the president and Biden remain tied in the heavily populated and mostly Democrat county of Miami-Dade. This doesn’t bode well for the left-wing or for Biden supporters; neither does the reality that President Trump’s support amongst Hispanic voters is at all-time highs.

As Florida Democrats crash and burn, a left-wing organizer from South Florida has some very telling news. The news entails that late campaigning in Florida, coupled with a lack of “love” for Biden isn’t doing the Democrats any favors. So, in essence, while Democrats are struggling to motivate and get out their votes in the Sunshine State, Republicans couldn’t be in a better position.
All things considered, President Trump appears poised to win Florida this year, just as he did during the 2016 presidential election.

While the election gradually wraps up, the endorsements for President Trump aren’t slowing down. Just days ago, the president was publically endorsed by a Philadelphia firefighters association and hip-hop rappers like Lil Wayne and Lil Pump.

Just had a great meeting with @realdonaldtrump @potus besides what he’s done so far with criminal reform, the platinum plan is going to give the community real ownership. He listened to what we had to say today and assured he will and can get it done. 🤙🏾 pic.twitter.com/Q9c5k1yMWf

Both rappers praised the president for his fiscal policies; Lil Wayne posted a selfie of him with the 45th president, stating that Trump agreed to and can get done a series of proposals to help the Black community.
Meanwhile, Lil Pump’s endorsement of Trump arrived via Instagram as he slammed the massive tax increases that Biden is promising to implement if he wins Tuesday’s election.
Do you think President Trump will win Florida for a second presidential election in a row? We want to know your thoughts in the below comments section.