On Friday, Americans learned that Melania Trump, the first lady of the United States, received a positive test for COVID-19.
In addition to the first lady’s positive diagnosis, others within the Trump inner circle also got similar news. Some of the individuals to recently contract the virus include President Trump himself, former White House counselor Kellyanne Conway, former New Jersey Governor Chris Christie, White House aide Hope Hicks, etc. 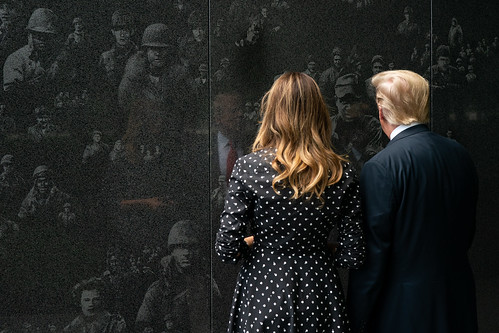 Since the news of the first lady’s diagnosis, Americans have weighed in with well wishes and hopes of recovery arriving from both sides of the aisle.
Yesterday morning, the first lady’s chief of staff informed that she is doing OK and presently on stable ground while fighting off the virus, documents Washington Examiner.

The Latest on Mrs. Trump’s Fight Against COVID-19

On Saturday, Americans learned that the first lady’s mild symptoms of the virus have not worsened.
While the president went to Walter Reed Hospital for precautionary measures, Trump stayed in the White House; the first lady’s chief of staff also noted that she is resting, taking it easy, and keeping in contact with the president.

Thank you for the love you are sending our way. I have mild symptoms but overall feeling good. I am looking forward to a speedy recovery.

The nation also learned that Trump isn’t expected to be taken to a hospital. According to Sean Conley, President Trump’s personal doctor, the first lady is “convalescing at home” and also thinking of other Americans who contracted COVID-19. As Trump takes on the virus herself, she also extends well wishes and hopes for recovery to others who are ill.
Finally, Conley informed reporters that the first lady hasn’t exhibited symptoms that would demand “advanced therapy” or transportation to a hospital.

News about the first lady’s recovery from the virus arrives as President Trump also shares similar, positive updates with Americans.
In a recent video posted to his social media accounts, Trump explained that he’s doing well. The president also thanked the medical professionals at Walter Reed Hospital and around the nation.

Images of the president working in Walter Reed Hospital, in spite of his positive coronavirus diagnosis, are also circulating around the internet. Conservatives and other supporters of the president have praised this, stating that the president’s neverending work on the nation’s behalf further makes the case for four more years!
Are you glad to learn that First Lady Melania Trump is having a smooth recovery from COVID-19? Let us know what you’re thinking down below in the comments section.