Contrary to what many Democrats would like people to believe, there are differences between peaceful protests and violent riots. Burning down buildings and setting cars ablaze is not peaceful protesting; neither is beating up people in the streets or looting businesses.
Monday marked a pivotal turning point in the nation’s tolerance for dealing with these violent and anarchist demonstrations. Yesterday evening, the president warned that he will send in the military to deal with cities that continue to suffer from looting, arson, etc. 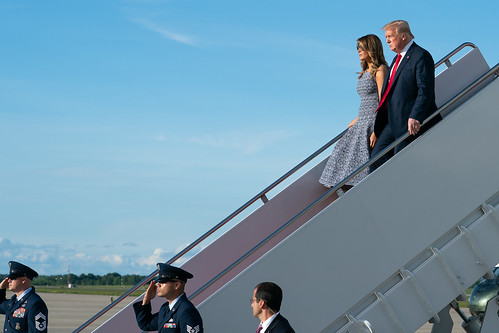 However, President Trump was not the only member of his family to speak out against the violent demonstrations that have plagued America for a week now.
On Monday, First Lady Melania Trump also spoke out, urging for peaceful protests, rather than violent riots, confirms Washington Examiner.

What to Know About the First Lady’s Call for Peace

Mrs. Trump posted on Twitter yesterday, calling for people to engage in “peaceful protests” rather than loot and pillage America. Less than 24 hours before this message, D.C. rioters defaced iconic monuments in the nation’s capital with graffiti and set fire to St. John’s Church.
In the first lady’s message, she encouraged Americans to focus on healing the nation and supporting one another. She also noted her “sadness” over the state of where our country is right now.
See for yourself:

Saddened to see our country & communities being damaged & vandalized. I ask everyone to protest in peace & focus on taking care of one another & healing our great nation.

Yesterday did not mark Mrs. Trump’s first time emphasizing the importance of peaceful protests. On Friday, the first lady also talked about the need for care and unity, citing the ways that Americans came together in response to coronavirus.
What do you think about Mrs. Trump’s urge for Americans to come together and cease violent riots? Do you think people will be able to peacefully protest without the president having to call in the military? Sound off with what you anticipate in the comments section below!