Democrats Turning to 25th Amendment to Oust Trump from Office

Since President Trump got into office, Democrats have worked overtime to remove him. The nation witnessed this in a series of instances; from accusations of collusions with Russia, Ukraine, and then the infamous impeachment sham, Democrats have never given up the quest to boot out Trump.
With less than four weeks until Election Day 2020, Democrats still aren’t giving it a rest. Following President Trump’s diagnosis with COVID-19 (and his subsequent release from Walter Reed Hospital), Democrats are now floating around the idea of the 25th Amendment to get Trump out of office, Washington Examiner reports. 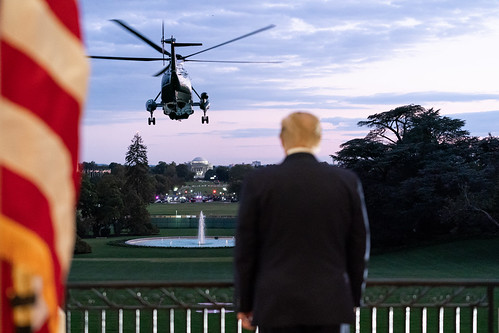 The 25th Amendment, in a nutshell, asserts that if the president becomes unable to carry out his duties, then the vice president would assume the role of commander-in-chief.
Of course, absolutely no indication of Trump being unable to lead has surfaced; in fact, the president just received medical approval for public engagements.

Why Democrats Want to Use the 25th Amendment

Booting the president out of office is Democrats’ ultimate objective in using the 25th Amendment. Speaker of the House Nancy Pelosi has already attempted to lay out the groundwork for this, asserting that Trump is existing in an “altered state.”
This assertion lacks both medical and factual basis. As a matter of fact, Trump’s medical clearing for public engagement tells an entirely different story than the narrative being put out by the left.

The Gallup Poll has just come out with the incredible finding that 56% of you say that you are better off today, during a pandemic, than you were four years ago (OBiden). Highest number on record! Pretty amazing!

Republicans, of course, are slamming Pelosi and Democrats’ talks of meeting to discuss the use of the 25th Amendment.
House Minority Leader Kevin McCarthy, a Republican, stated that Democrats have an unhealthy obsession with the president; McCarthy additionally noted that Pelosi’s latest fixation with using the 25th Amendment against Trump calls into question her ability to lead as House Speaker.

The Truth About President Trump’s Health

One week ago, Americans learned that the 45th president tested positive for COVID-19. Since this period, Trump has received necessary medical care and is back on his feet.

Democrats are obsessed with President Trump. First they failed at impeachment, & now they are wasting the country’s time with Pelosi's latest stunt.

This calls into question her capacity to understand & discharge her duties as Speaker.

After leaving Walter Reed Hospital, the president encouraged Americans not to be afraid of the virus or allow it to “dominate” their lives. Following treatment from healthcare professionals, Trump even explained that he feels better than he’s felt in 20 years.
Many Americans also learned that the treatment provided to the president will soon become available to the general public.
How far do you think Democrats will take this stunt with the 25th Amendment? Let us know in the comments section below!