Immigration reform is a core issue that continues to come up during the Democratic National Convention.
It’s no secret that Republicans and Democrats maintain very different views on appropriate immigration policies. Over the past few years, the left has embraced radical proposals that even they used to oppose. Meanwhile, conservatives who favor legal immigration are often attacked by Democrats and deemed as xenophobic racists. 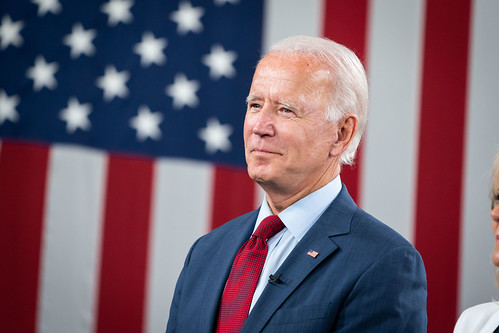 “All Staff Zoom Call with Vice President” (CC BY-NC-SA 2.0) by Biden For President

Over the course of this week, Democrats speaking at the convention have weighed in on immigration reform multiple times.
The problem, however, is that false narratives and choices are being put forth; at least that’s how many Republicans see matters, according to Fox News.

A Closer Look at Criticism of Leftist Immigration Policies

Steve Cortes, a top strategy adviser for President Trump’s 2020 campaign, did not hold back when citing issues with Democrats’ immigration reform proposals.
Cortes slammed the Democrat Party for a “conflation” of illegal immigration with legal immigration. As most Americans know, the former entails hopping across the border or otherwise sneaking into the country; the latter entails following America’s immigration laws and lawfully coming to America.

Democrats have consistently failed to make or acknowledge the very clear distinction. In fact, in leftist circles, support for open borders and no immigration laws is branded as compassionate and caring.
Furthermore, top Democrats are on record pushing for the abolition of Immigration and Customs Enforcement (ICE) and a release of persons held in detention facilities.

An Insult to Legal Immigrants

The Trump 2020 senior strategy adviser also noted that Democrats’ support for illegal immigration is an insult to legal immigrants, as is the conflation of illegal immigration and legal immigration.
Cortes informed Fox & Friends that President Trump’s re-election team will continue promoting lawful immigration to the nation. Furthermore, the top adviser confirmed that neither the president nor his campaign is “anti-immigrant,” but instead anti-open borders.

CBP's Hector Garza: “walls work and they keep our country safe…we support President Trump because he supports our Border Patrol agents and the safety of the American public.”

Agent Garza is one of the many Hispanics serving in the most Hispanic agency of the federal govt… pic.twitter.com/Za3ks5ymvt

This marks another point of conflation on the end of the Democrats. Sadly, it is not uncommon for Democrats to directly or indirectly assert that opposition to open borders is tantamount to dislike or hatred of immigrants.
The Republican Party’s stance on immigration remains very clear: individuals seeking to enter the United States must do so legally.
What do you think about the Democrat Party’s stance on immigration? Be sure to share your thoughts about legal immigration and illegal immigration down below in the comments section.