Democrats Pushing Biden to Renege on Debates Against Trump

Earlier this year, both President Trump and Joe Biden agreed to partake in three debates with one another. General election debates are a longtime American tradition; however, the 2020 presidential election has prompted new talks and conversations about the forthcoming debates.
Since kicking off his presidential campaign, Joe Biden has repeatedly stumbled and stammered. The former vice president’s tendency to put his foot in his mouth is impossible to miss; not only has Biden confused the titles of world leaders, stared off into space, and made countless verbal flubs, but he’s even landed in heated confrontations with voters. 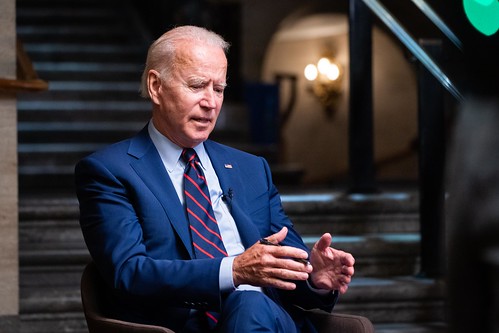 Many conservatives, therefore, believe that Biden won’t do too well in debates against President Trump. Apparently, Democrats share this outlook (even if they aren’t publically admitting it) because they’re urging Biden not to debate President Trump, confirms Breitbart News.

Will Biden Debate Against President Trump?

At this time, the Biden campaign has not rescinded its commitment for the former vice president to debate the president; however, this doesn’t mean that top Democrats aren’t pushing for them to do so.
Already, several op-eds have appeared, stating that Biden should decline to go against Trump on the debate stage; a New York Times opinion piece even called for the cancellation of presidential debates altogether.

.@SpeakerPelosi: “Don’t tell anybody I told you this.. Especially don’t tell Joe Biden. But I don’t think there should be any debates.” pic.twitter.com/Guu8Jkl1Gs

Yesterday, during House Speaker Nancy Pelosi’s press conference, she told reporters that Biden shouldn’t debate against President Trump. Instead of admitting that she fears Biden would lose said contests, Pelosi claimed that the president shouldn’t be “legitimized” by Biden sparring with him on the debate stage.
Pelosi then professed that Trump acts in a manner that besmirches the dignity of the Oval Office; the House Speaker also went on to state, without basis, that “truth, evidence, data, and facts” are alien to the 45th president.

Since Pelosi’s calls for Biden to opt-out of presidential debates against Trump, conservatives are weighing in with their thoughts.
Many Americans on the right believe that Democrats’ aversion to Trump-Biden debates are out of fear that the former vice president won’t be able to manage himself.

Joe Biden is clearly reading from a script while struggling to get through this interview with Anderson Cooper pic.twitter.com/PsD7vBLIik

Conservatives also aren’t hesitating to point out the double standard here; if Republicans or Trump were attempting to back out of debates with Biden, the left would decry this as unAmerican and cite the commander-in-chief as fearful of the former vice president.
Trump supporters have stated that if Democrats truly believe that Biden is so morally above the president, he ought to prove it during his three, promised debates against Trump.
Do you think Joe Biden will cave to pressure and weasel out of the three debates with President Trump that he agreed to? Be sure to let us know your predictions down below in the comments section.