"Democrats for Trump" on the Rise in 2020 Presidential Election

Throughout the 2020 presidential election, the mainstream press has made a point of touting crossover support…at least, crossover support that exists in favor of Democrat presidential nominee Joe Biden.
“Republicans for Biden,” Never-Trumpers, and Trump-hating “conservatives” connected to the Lincoln Project get massive mainstream attention. The liberal press touts these outliers as evidence that shows supposedly-declining GOP support for President Trump. 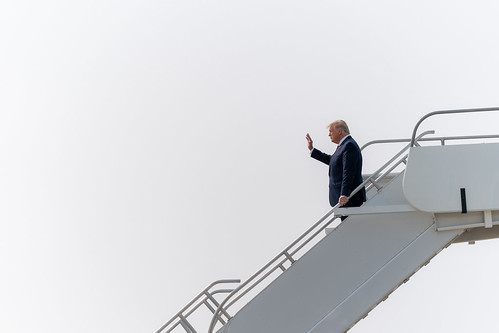 Not only does the 45th president continue to enjoy massive support and approval ratings from the GOP, but he also has the backing of some Democrats. Earlier this year, a group of Democrat Minnesota mayors endorsed President Trump.
Now, Townhall confirms that Maurice Davis, Michigan’s Flint City Council vice president and a Democrat, is backing President Trump.

What to Know About Democratic Support for President Trump

As a lifelong Democrat, Davis spoke in front of Vice President Mike Pence, explaining his reasoning for backing President Trump this election cycle. The Flint City Council member stated that despite his vote for Hillary Clinton in 2016, he believes the Democrat Party of today is now consumed with hatred.

Davis delivered his remarks and official endorsement of President Trump at the Flint Bishop Airport. This endorsement comes after his previous criticism of riots and looting being perpetrated by Black Lives Matter individuals.
The Flint City Council vice president furthermore noted the idiocy of individuals ripping apart their own communities; then, he called out the hypocrisy of the left despising President Trump, but not despising the $1,200 stimulus checks that came from the president earlier this year.

The Underlying Theme of Democrats for Trump

During multiple occasions, the president has invited Democrats who are disillusioned with the current state of their party to come join the GOP.
While the mainstream media remains silent about non-right-wing support for the president, it doesn’t erase this support. Ultimately, the underlying theme of Democratic support for Trump is rooted in the radical left turn the party has taken.

.@BarackObama has talked more about helping Blacks in the last 24 hours trying to save @JoeBiden the bigot, than he did his entire 8 years in office. Too late #BO, #Joe has been run over by @realDonaldTrump and the #TrumpTrain! @BlackVoices4DJT #BlackVoicesForTrump #FeelTheVern pic.twitter.com/mKshPKobzG

Many moderate leftists of today do not recognize the current Democrat Party. The attitudes and positions that Democrats of today have adopted are not “liberal” by any means. Therefore, some leftists are now jumping ship and hopping aboard the Trump train.
What do you think about more Democrats endorsing President Trump? Which candidate do you believe retains the strongest crossover support: Trump or Biden? Be sure to let us know in the comments section below.