In the wake of violence across major American cities, national conversations about law and order have surged.
Many people across the nation feel as though the presence of police officers is necessary. Individuals with this mindset generally favor law enforcement and the provision of funding to keep police officers in a position to do their jobs. 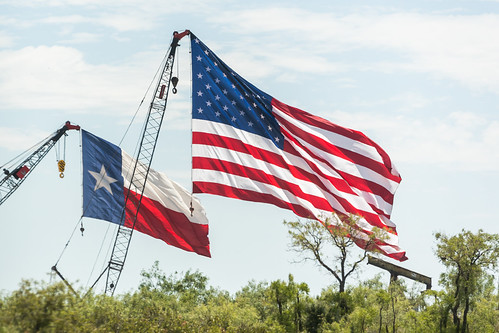 “President Trump in Texas” (Public Domain) by The White House

However, not everyone in America shares this outlook. Unlike those who value the presence of police officers, there is a separate group that seeks to defund and abolish the police altogether. Of course, while Republicans largely fall into the former category, Democrats collectively fall into the latter.
This is why the Democrat Party has now earned a reputation as the “pro-criminal” party, notes Breitbart News.

The Pro-Criminal Party of the United States

Support for — and actions to — defund(ing) the police continue to bite Democrats. To date, multiple Democrat mayors have signed off on removing funding from their local police departments. Gretchen Whitmer, the governor of Michigan, took things one step further in July when she withdrew around 25% of funding from the Michigan State Police.
Actions like those don’t do the Democrat Party any favors. This is something that former Speaker of the House Newt Gingrich pointed out during a recent radio interview with The Cats Roundtable.

While speaking with the radio show, Gingrich informed the hosts and listeners that Democrats will never win on a platform of being “anti-police” and “pro-criminal.”
By its very nature, defunding the police is giving criminals free rein to do exactly as they please. Removing funding from police departments sabotages law enforcement and leaves the most helpless and vulnerable Americans at the mercy of sadists, sociopaths, and psychopaths.

Why Democrats Seek to Defund the Police

If you ask Democrats why they want to defund law enforcement, they’ll assert that policing is rooted in “racism” and “white supremacy.” It’s important to remember that such answers are falsehoods and merely a smokescreen for the truly insidious agenda behind abolishing law enforcement.

The media CANNOT cover for Joe Biden saying he would defund the police:

"If you don't think 'redirect' is the same thing as 'defund' then let me 'redirect' your next paycheck into my bank account!" pic.twitter.com/C6F7ZYt2Rn

The move to defund the police is rooted in nothing more than power and a desire to expand government control. The Democrat mayors and other political leaders who are endorsing defunding the police and withdrawing funding from police departments have yet to let go of their own personal security details; this, in and of itself, speaks volumes.
Defunding the police is a political game that will leave many Americans at the mercy of the wolves if it succeeds.
What do you think about the Democrats’ embrace of defunding the police? Let us know down below in the comments section.