Filing the current vacancy on the Supreme Court has become a top priority for Republicans. President Trump’s nomination of Judge Amy Coney Barrett led to days of hearings in the Senate where Republicans and Democrats asked Barrett various questions.
Democrats, of course, held nothing back in their work to delegitimize Barrett’s hearing. They also asked the mother of seven different questions meant to demean her family, faith, and character. 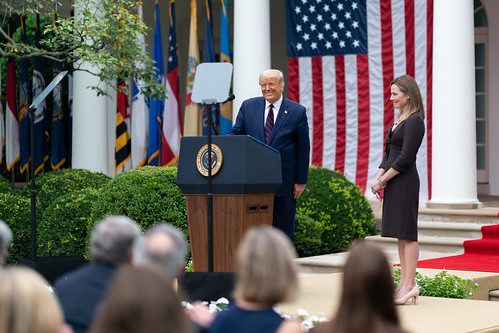 Despite the antics and tantrums from members of the Democrat Party, Republicans are moving forward to get Barrett confirmed as soon as possible. According to Washington Examiner, the U.S. Senate will hold a vote next week to officially confirm Amy Coney Barrett as a Supreme Court Justice.

What to Know About the Senate’s Upcoming Confirmation Vote

During a closed-door convening with Republicans, Senate Majority Leader Mitch McConnell announced the upcoming vote. The GOP has repeatedly maintained that getting Barrett confirmed to the Supreme Court is important and must happen prior to November 3; now, time has shown that Republicans are committed to making this happen.
The vote that McConnell has branded as a “signature accomplishment” will take place on Monday, October 26. Meanwhile, tomorrow is set to mark the Judiciary Committee’s work to further the nomination of Barrett.

There’s no question that Judge Amy Coney Barrett is the *perfect pick* for the United States Supreme Court.#ConfirmACB 🇺🇸 pic.twitter.com/ThT2PvRW0W

After the president’s nomination and Barrett’s subsequent testimony before the Senate, the GOP is more than ready to move forward and fill the vacant seat within the Supreme Court.

The Democrats have realized that they have little to no recourse to block the nomination of Barrett.
As such, the Democrats are floating around the idea of packing the Supreme Court. Of course, this could only happen if Democrats were to regain control of the Senate and if Joe Biden somehow defeated President Trump.

And now—after 5 LONG MONTHS—even the media sees it too.

And America is fed up. pic.twitter.com/kDjfhP479x

Republicans remain confident that the incumbent president will win the 2020 election; however, they’re also preparing for the worst. Texas Sen. Ted Cruz, a Republican, recently introduced a possible constitutional amendment that would block packing the Supreme Court.
Either way it goes, the outcome of this year’s presidential election will significantly impact not only the Supreme Court, but also the nation at large.
Are you looking forward to the confirmation of Judge Amy Coney Barrett? Should there be a constitutional amendment that blocks court-packing? Let us know your thoughts on all of this in the comments section below!