The treatment of law enforcement is playing a major role in the 2020 presidential election.
As Joe Biden and Kamala Harris seek to boot President Trump and Vice President Mike Pence out of office, they cannot escape the pivotal factor of policing in America.
Biden and Harris have each adopted radical policies, including support for defunding police. Meanwhile, the president and vice president remain committing to supporting law enforcement, not abolishing them. 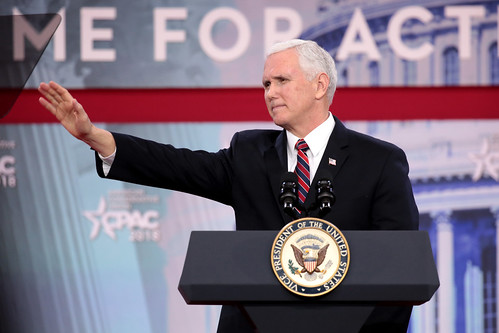 On Tuesday, a Cops for Trump event took place in Arizona, according to Breitbart News. During this event, law enforcement officers and others were able to, once again, note the contrast between Trump-Pence and Biden-Harris as it pertains to policing in the United States.

A Closer Look at Cops for Trump in Arizona

The vice president spoke at Arizona’s Cops for Trump event earlier in the week, During Pence’s remarks, he drew attention to the false dichotomy painted by the radical left and its activists.
Despite leftist narratives, supporting police and caring about the lives of black Americans are not mutually exclusive entities. The vice president pointed this out in addition to noting that America has and will continue to “do both.”

These statements arrived not long after Pence criticized Biden’s and Harris’ support of the narrative that law enforcement is “systemically racist.”
Shortly thereafter, the vice president slammed leftist cities that have chosen to reduce funding for their police department. Pence warned that “weakness arouses evil,” before drawing attention to the crime surges in cities with defunded police departments.

The Biden-Harris Plan for Law Enforcement

Both Joe Biden and Kamala Harris are fully on board with plans to withdraw funding from police departments across the nation. The California senator is actually on record stating that Americans should “reimagine” policing in the country.

Joe Biden & Kamala Harris want to raise taxes by $4 trillion, they want to do their own version of the Green New Deal, they’re going to appoint activists to our Courts, they support taxpayer funded abortion, they support open borders & they want to cut funding to law enforcement. pic.twitter.com/IJvVlApHpr

Trump and Pence have repeatedly gone after the left for its flagrant support of dismantling law enforcement in the United States. As Biden and Harris continue their support for defunding the police, this issue will remain relevant throughout the 2020 presidential election.
Already, several police groups and law enforcement organizations have come out and endorsed President Trump’s re-election. By contrast, the Communist Party is all on-board for Biden-Harris 2020.
How do you think support for law enforcement will impact the 2020 presidential election? What did you make of the Cops for Trump event in Arizona this week? Be sure to share your thoughts with us down below in the comments section.